Buy me a ☕️ Coffee

The most exciting moment for every mushroom cultivator! You couldn't even imagine the emotional spectrum at this moment. Amazing feelings... Take a look! 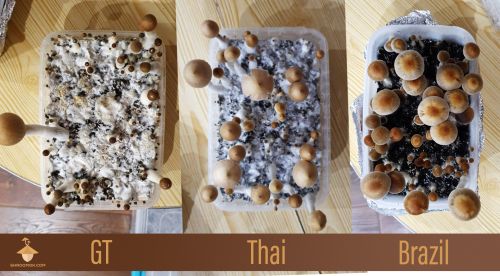 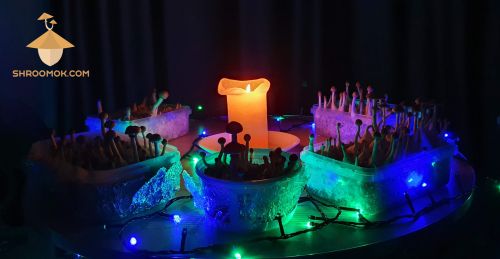 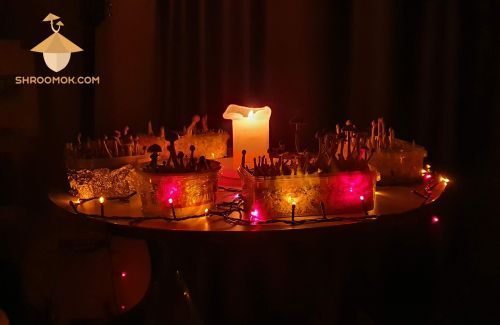 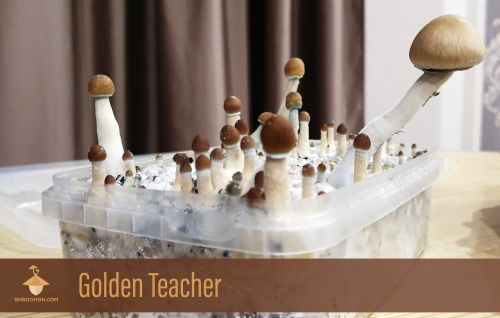 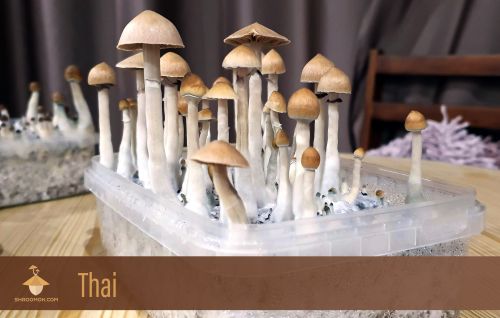 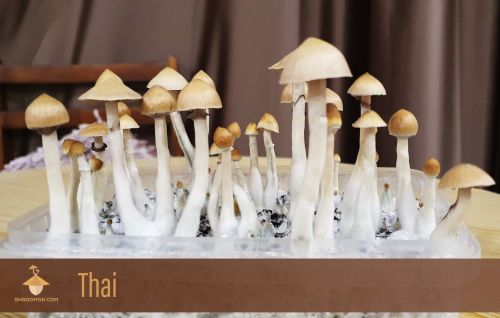 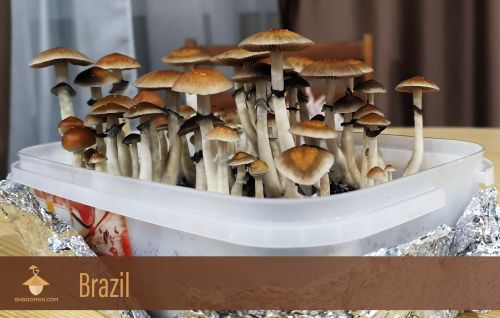 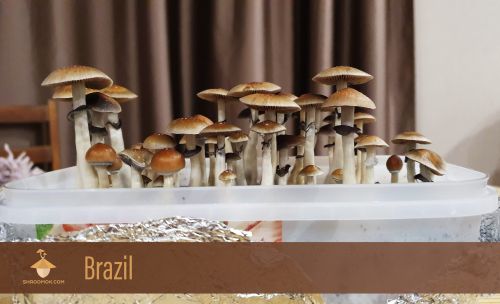 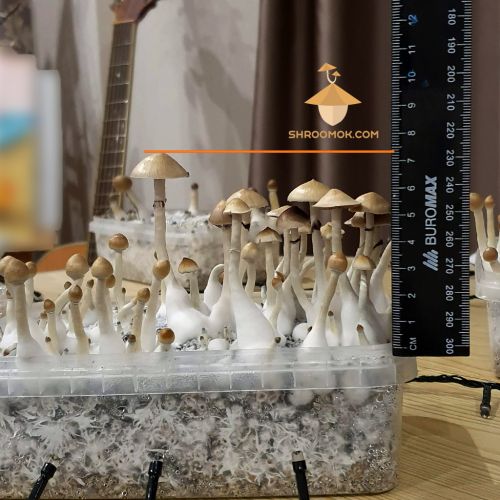 Height of first magic mushrooms is about 5-8 cm. First harvest of Psilocybe Cubensis

When to harvest magic mushrooms

When mushrooms tear the veil and open their caps to release spores they stop their growth. From this time they also stop increasing the amount of psychoactive alkaloids. Opened caps is the exact sign for harvesting! 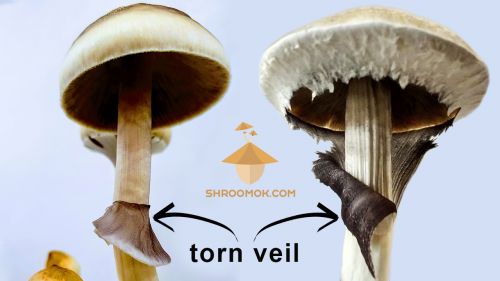 The best time to prepare your own spore prints right after torn veil.
🔴 Recommended article: How to make magic mushrooms spore prints

Sometimes mushrooms ripe unevenly. All mushrooms (even small ones) should be picked during the peak of the harvest or the day after it.

You can pick them partially. On the first day you can pick mushrooms with torn veil only and let small shrooms to grow for one more day.

For example, the first flush of fruiting and our first harvest we got in 2 steps. On the first day were harvested only mature mushrooms with torn veil. Small mushrooms were left on the cake. The next day absolutely all mushrooms were picked from the cake (including the smallest mushrooms).

In fact we are waiting for "torn veil" moment to make spore prints with mature spores. If you don't need spore prints you can pick mushrooms of the different sizes

There's no reason to wait until all the mushrooms are mature and tear the veil. The sooner the flush is harvested the faster the next flush appear the shorter the total cycle. Small mushrooms should be removed as well. It is often the first flush (multiculture cultivation) isn't the most productive. The second and third flushes can be more productive after dunking in water aka rehydration. Fruit bodies will be larger.

As the nutrient substrate is depleted there will be fewer and fewer crops. On the last flush you'll find a few large or a few small strange mushrooms and aborts

How to harvest magic mushrooms: pick or cut?

Twist mushrooms by rocking slightly to the sides and remove them gently. So that you won't damage mushroom cake and reduce the risk of contamination.

If a piece of substrate comes off don't put it back. Just throw it away.

If a piece of mushroom stump remains after picking try to remove it. Why? Because after rehydration such stumps can provoke contamination (wet rot). It's not a common situation, just be warned this happens.

Before rehydration all mushrooms should be removed. Mushroom cake should be totally bald, thus preparing it for the next step — rehydration and new flush of fruiting.

Leave small pinheads and primordia (2-3 mm) on the cake. There is an opinion primordia after rehydration can rot and kill the entire cake. It has never happened in our experience, actually we need to warn you.

Pick as much as you can. If you leave small pins and primordia on the cake it's not a problem . Moreover, primordia continue their growth on the next flush of fruiting.

Results of the first flush of fruiting and harvesting period (5 mushroom cakes): 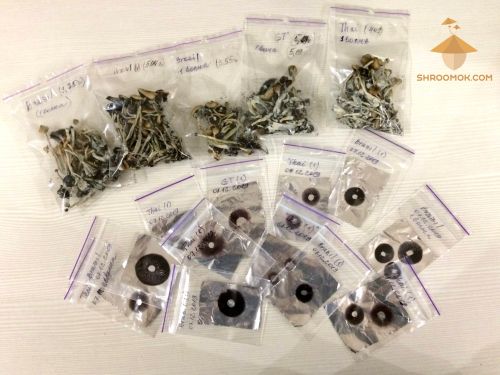 Final results of the first flush of fruiting and harvesting period. Dried psilocybe cubensis (21,62 grams) and 12 spore prints for storing

To be honest, it's a pretty small crop.

What happened if we leave mushrooms on the cake for a long time?

Torn veil means spores are ready for spreading around. It is an endless process in nature. From this moment mushrooms stop increasing psilocybin, psilocin and baeocystin.

If you leave mushrooms for a long time to sporulate everything around will be covered with spores. More examples in the photos and video below: 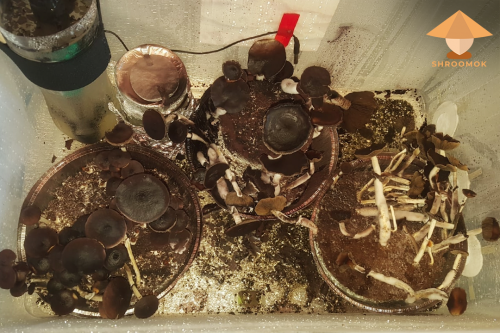 When you failed to pick mushrooms in time. Credit: mrZimm 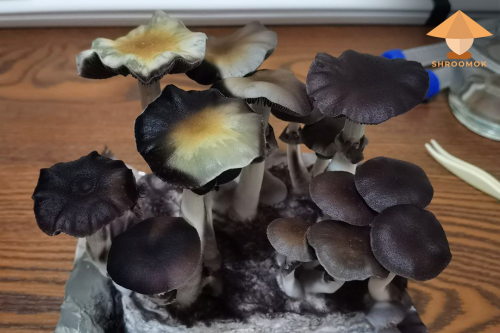 What to do next?

The next step of our growing diary — Step 13. Day 32-33. How to freeze, dry and store psilocybin mushrooms ▶️

🍄 Support Shroomok and buy a mushroom 🍄

Feel free to ask questions, share your own experience and join Shroomok community in Discord, Reddit, Telegram Chat, Telegram Channel or in comments to this post ⬇️⬇️⬇️