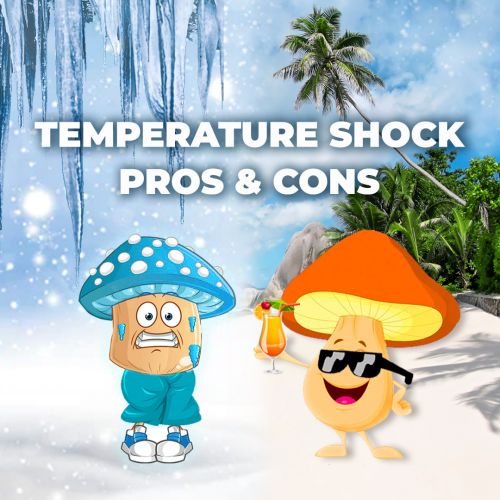 Temperature shock method is used for pinhead initiation and for increasing yield.

There are a number of positive and negative effects of temperature shock (cold shock and heat shock). That's why it's highly debated topic online.

For each «pro» and «contra» there is its own logical argumentation.

Let's figure out what is Cold Shock? What is Heat Shock? Why and how to proceed Cold Shock? Advantages and disadvantages of such methods.

What is cold shock and heat shock?

Cold Shock — is a procedure when the colonized mushroom cake with a casing layer is stressed by a sudden drop in temperature — for 12-24 hours in the refrigerator at +2ºC to 4ºC (35-39°F) before introducing it to the fruiting conditions.

Heat Shock — is a procedure when the colonized mushroom cake with a casing layer is stressed by raising the temperature — for 3 hours at +35°C to +37°C (95-99°F) before introducing it to the fruiting conditions.

This works as some kind of trigger, so that the mycelium understands that it has been taken out of its comfort zone and needs to form the reproductive organ of the fungus — the fruit body to spread spores as soon as possible and continue its fungal lineage.

Scientific studies on the effect of temperature shock

Temperature is one of the most critical factors in cultivation of any kind of fungi as it affects survival, growth rate, time of fruiting, yields, molecular changes in protein structure and even mushroom morphology.

The survival of fungi is determined by temperature but also exposure time. Mycelium perishes at high temperatures around 45°C (Tokimoto and Komatsu, 1978). However, prolonged exposure at temperatures above 35°C can also kill the mycelium (Tokimoto et al., 1982).

Developing mushrooms will tolerate freezing temperatures for short periods of times, but can be damaged or killed by prolonged exposure (Tokimoto et al., 1982).

The limits of temperature sensitivity of different fungal species depends on their genetics. Including their natural climatic conditions where they grow in the wild.

The cold shocking and heat shocking techniques came from experiments of various kinds of stresses on edible mushrooms. In particular, various shiitake strains.

Many researchers indicated that temperature also plays a very important role in pinning and fruiting. Komatsu (1961) showed that pinning is induced by a sudden shift in temperature or by a period of fluctuating temperatures. The temperature during pinning is also critical for maximum yields and mushroom shape (Ohira et al., 1982).

A detailed study of stress factors can be found in "Effect of Stress on Fruit Body Initiation of Shiitake Mushroom Lentinula edodes" by professor Tjia Wai Mui (The Chinese University of Hong Kong, 2002).

He found the stress gene, which was a trigger for fruiting initiation. Thus, for shiitake, heat shock (at +37°C or 99°F for 3 hours) increased the speed of pinhead formation, while cold shock (at +4°C or 39°F for about 12 hours) increased the number of pinheads and overall yield (compared to the inhibitory effect of non-temperature stresses with salts and ethanol in his study).

But what about psilocybin mushrooms?

There are a million discussions about temperature shock for psilocybin mushrooms in forums. But often the conclusions are based on hypotheses and guesswork.

That's why we decided to conduct our own experiment «Cold Shock by Shroomok». The conditions and results will be presented in this section.

How to make cold shock?

There are 2 options for implementing a cold shock.

1️⃣ Cover the mushroom cakes after colonizing the substrate and completing the colonization of the casing layer and place in the refrigerator at +2°C to +4°C (35-39°F) for 12-24 hours.

2️⃣ Pour cold water over the mushroom cakes, cover with a lid so the cakes are completely submerged, and place in the refrigerator at +2°C to +4°C (35-39°F) for 12-24 hours. In this way, cold shock and rehydration of the mushroom cakes is carried out at the same time. Such rehydration with cold shock is sometimes practiced before each flush of fruiting.

✅ Can be useful for mushroom cakes that continue vegetative phase in normal fruiting conditions. Thus, it is possible to prevent overlay and affect genetic stroma.

⛔️ Cold shock can provoke an overlay or stroma. Overlay (mycelium overgrowth) is a dense mycelium coat that forms on the surface of the substrate and prevents pinheads and primordia formation.

Considering all possible advantages and disadvantages are listed above, experiment was made with adjusting the temperature and duration of cold shock for the warm-weather Psilocybe Cubensis mushroom cakes. Strains are Thai Brazil and F+.

Each strain from a single spore print.

🍄 Other cakes (Thai, Brazil) were moved in fruiting conditions without temperature shock in order to compare the results with exactly the same mushroom cakes after cold shocking.

Results of the experiment «Cold shock by Shroomok»

Let's compare the results of the mushroom cakes that were subjected to cold shock with those cakes that were immediately moved to the growbox for fruiting phase without temperature shock.

We ended up with the following results:

🔶 On the cakes that were cold-shocked, pins and primordia formed 1-3 days earlier.

🔶 The number of pins, primordia and yield from cakes after cold shock in the first flush of fruiting was higher by 5-10% compared with cakes that were not stressed.

🔶 There were no abortions on cakes after cold-shock in any flush of fruiting.

🔶 There were no overlay or stroma on any of the Thai and Brazil cakes.

🔶 An attempt to "treat" stroma overlay by cold shocking and stop the vegetative growth of the mycelium was unsuccessful. After removing overlay and cold shock with rehydration mushroom cake was covered with a dense white coat of mycelium again without pins and primordia formation.

Psilocybe Cubensis Brazil. Only 5 days in the growbox after cold shock and rehydration. Mushroom cake has already produced pins and several primordia.

The results of Psilocybe Cubensis Thai. 7 days after the cold shock and moving the cake in the growbox. Small primordias are already turned into small mushrooms. 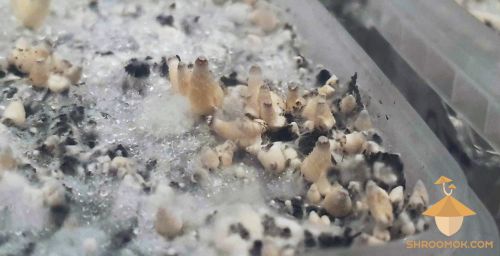 Psilocybe Cubensis Thai after cold shocking. 7 days in the growbox.

Psilocybe Cubensis Thai. 9 days in the growbox after cold shocking.

Psilocybe Cubensis Thai (in the foreground). 10 days in the growbox after cold shock. 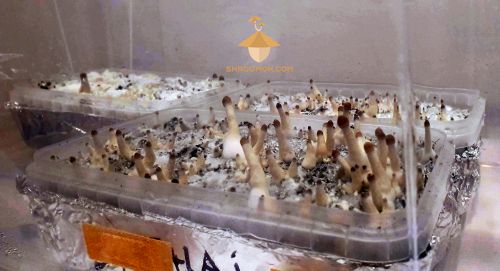 Psilocybe Cubensis F+ after removing the stroma overlay mycelium and cold-shock with rehydration was covered again with a new dense snow-white coat of mycelium.

🔬 In fact, for the heat-loving Psilocybe Cubensis, the cold shock is a drop in temperature from +27...+29°C (in the incubator) to +21...+23°C (in the growbox). With this temperature difference, fruiting comes only 2-3 days later without any risk to the fungus.

🔬 A temperature drop of 10-15 degrees is not the same as a sharp drop of 25 degrees. The first option simply slows mycelial growth. And the second option can STOP further development of the fungus altogether. Therefore, it was decided to conduct the experiment at +12°C (54°F), not +4°C. And the time of cold-shock was reduced to 6 hours instead of 12-24 hours.

🔬 Experimental colld-shock with and without rehydration at +12°C (54°F) and a duration of 6 hours was successful and had positive effect on the number and rate of pin sets.

🔬 Cold shock for Psilocybe Cubensis Thai at +12°C (54°F) and lasting 6 hours without rehydration accelerated pinning and primordia formation by 2-3 days. And also increased the yield of the first wave of fruiting by 10% .

🔬Exposure to cold shock on the cake with cover overgrowth (overlay, stroma) had no positive results and did not stop vegetative growth of the mycelium. Details in the section What is overlay? Aborts and mushroom metabolites

Do we recommend cold shocking?

Cold shock is not mandatory for warm-weather psilocybin mushroom species, in particular Psilocybe Cubensis. Perhaps for those psilocybe species that originate from temperate climates, this technique would be closer to the actual natural conditions and consequently more useful.

This kind of stress can have a devastating effect on Psilocybe Cubensis at low temperatures of +2°...+4°C (35-39°F) and a significant dramatic temperature change of 23-28°C (40-50°F) after incubation. But this state wasn't confirmed in our experiment, so the question remains open until the next mycological experiment.

Our experiment also didn't include a heat shock and didn't reveal the effect of increased temperature on pinhead formation and yield.

This experiment isn't completed and requires a larger sample. Our results and preliminary conclusions are just for your information. It's not an advice.

Updates to current experiment will be posted in this section.

Now it's time to check different types of fruiting chambers or teks for mushroom fruiting.