Cooking the substrate for psilocybes

STEP 3. Day 1-2. How to cook grain substrate for magic mushrooms

On the previous step you've already chosen right grain and calculated the necessary volume. Now it's time to prepare substrate for spawn

Skip it for hulled millet and brown rice. 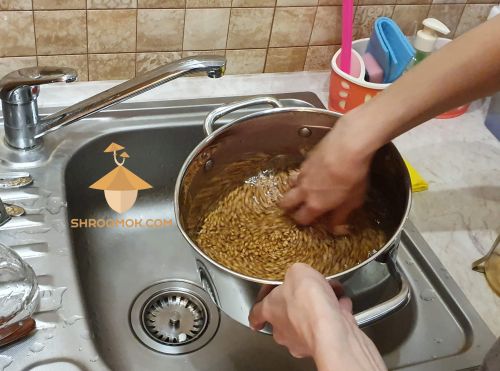 Why it is necessary to soak grain for spawn

It is optional step, but I recommend to do it! Why?

First of all, grain is saturated with the necessary moisture and cooks faster.

Now the most important reason. As you know bacteria multiply by simple cell division. To do that they need water. During soaking in water bacteria and their endospores inside grain are activated. To kill bacteria and endospores when they are woken up will be much easier and more effective. Here we are with pressure cooker and sterilization!

After 12-48 hours of soaking you can feel a yeasty, sweet and sour smell, notice some bubbles. Don't worry, this is normal and great state to rid them off by cooking the substrate and sterilization

What you need for grain substrate preparation

2️⃣ For an extra antibacterial effect add antibiotic pill before boiling the grain. You can use hydrogen peroxide 3% solution (H2O2) instead. Antibiotic or H2O2 help to get rid bacteria off.

If you use antibiotic (chloramphenicol or any analogue) add it in the following proportion: 1 pill/capsule (500 mg) per 1 Qt of grain and 1 Qt of water.

The dosage of the pill/capsule is indicated on the blister 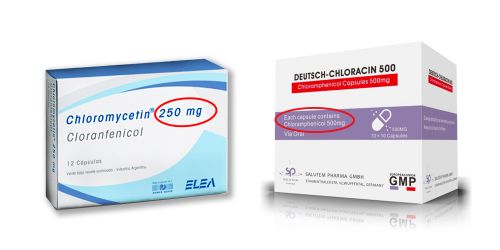 3️⃣ Grind a pill and turn it into powder. If you use antibiotic in capsules just open the capsule

Add clean water to the grain

7️⃣ Ready to cook on the stove!

How to cook grain substrate for mushroom spawn

1️⃣ Put a pot with water and grain on the stove. Bring to a boil over maximum heat (or maximum power) 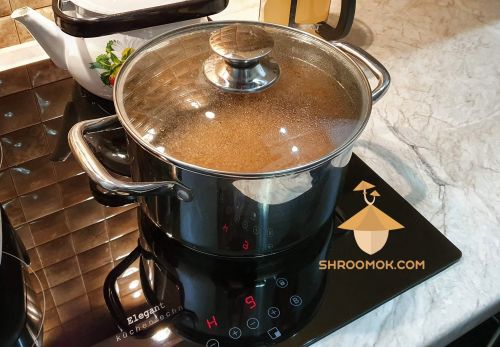 Start to boil grain for substrate

2️⃣ Turn down the heat, so that the water gurgles slightly. Continue to cook grain over low heat and count down the time from this moment!

How long does it take to cook the grain for magic mushroom substrate?

Cooking time of grain depends not only on the type of cereals, but also on the quality, variety, place of growth, storage conditions. Countdown of boiling time begins after water boils: 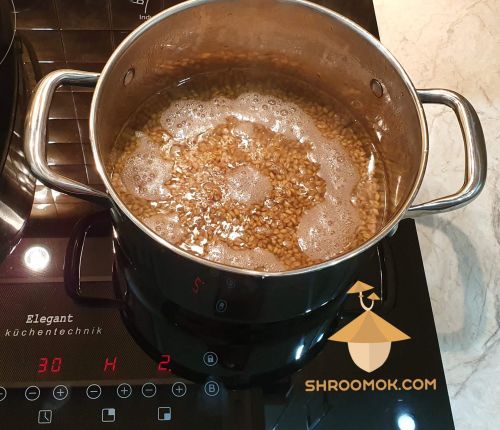 🔴 Make sure the grain doesn't turn into mush! If the kernels are over boiled or if the grain falls apart when lightly pressed, it means it is overcooked. Such grain should not be used. Subsequently, it will become sour and will be taken over by bacteria or mold. It is better to undercook a little bit.

Too much water = too little air = sourness = contamination = trash.

🔴 Too uncooked grain is also bad! Then the grain will not get enough moisture and the mycelium will be weak, grow poorly or not grow at all

Not enough moisture = weak growth of mycelium or no growth at all = trash.

Here is an example of too dry grain substrate 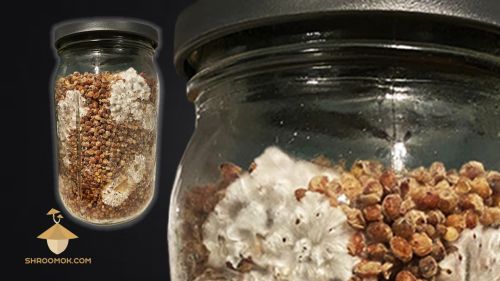 The grain should be springy, but soft :)

In general, if you see the first grains start to burst, it's a sign to stop boiling.

Another tip to check. Take a single grain, press it with your fingers and it should open easy. Grain is ready.

Grain should remain moderately dense and maintain the integrity of its shell. Such level of cooking should be for any type of grain: wheat, oats, barley, rye, rice, bird seeds, sorghum, millet, corn, etc. 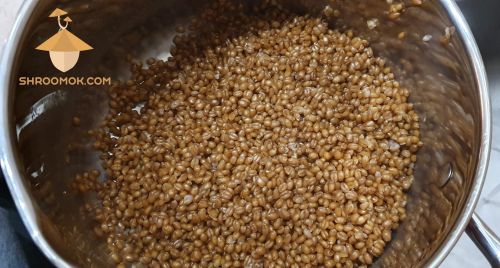 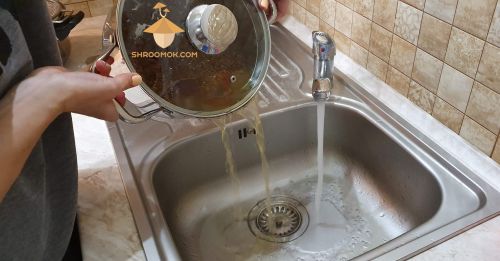 Drain water from grain after boiling 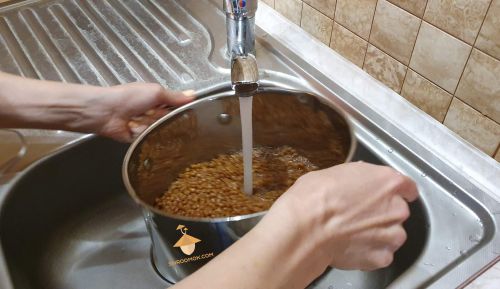 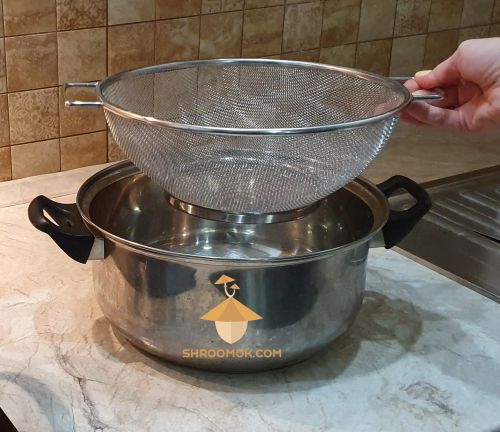 Put the substrate to sieve 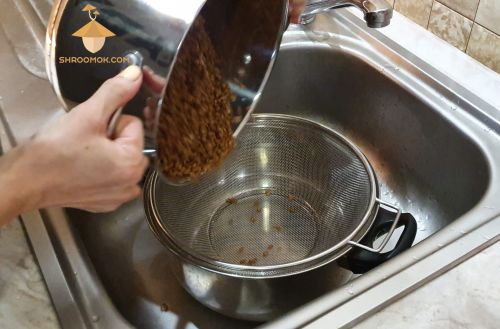 Move grain into the sieve

6️⃣ Leave the grain in this way for 30-40 minutes to let the excess water escape.

You can spread the grain on a towel in a thin layer and it will absorb the excess moisture, it will be faster.

How to determine if the grain is dry enough. Take a hand full of grain and put it on a paper napkin. If the grain does not leave obvious wet traces on the napkin — it's dry enough

From 1 Qt of DRY grain after boiling you'll get about 1.2-1.4 Qt of cooked grain

Leave grain in sieve for 30-40 minutes

7️⃣ Move grain from the sieve back into the pot and add 2-3 table spoons of vermiculite. I usually add it to wheat berries and brown rice. For other grain (corn, millet, sorghum, oat, rye) I don't add vermiculite.

Vermiculite works as a drainage for wet grain and avoid clumping. It allows good regulation of substrate moisture. If the grain is wet, it will take away excess moisture. And if in the process of colonization the grain loses moisture and it becomes dry, vermiculite will give back absorbed moisture to the grain. In addition, vermiculite will also serve as an additional fertilizer, because it contains some useful minerals 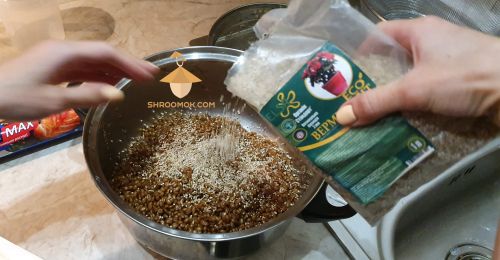 🔴 Substrate must crumble in hands, be moist, but NOT wet! Optimal you'll find with experience. For now just take a handful of grain in a dry hand. If you feel it is wet, but neither a drop or water on your hand, then it is enough vermiculite. If the grain is wet, don't afraid to add more vermiculite.

8️⃣ Stir thoroughly to have an even mass. As a result, substrate should look like this. 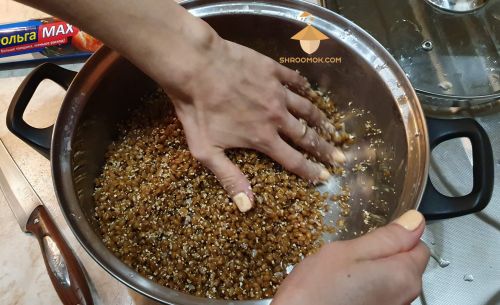 Stir substrate with vermiculite (or perlite)

I'd like to add great tip from our experienced grower astora♡ on Shroomok Discord:

For anyone struggling with Brown Rice, I use the 10, 10, 15 method. I let my water reach a boil on high heat for 10 minutes. Then I turn it to medium heat and let my rice boil for 10 minutes and after that I drain my rice and rinse with cold water and let it chill for 15 minutes before inserting into my jars!

You can buy ready for inoculation sterile grain for mushroom spawn and skip the next steps and move on Inoculation step.

Such option can save your time greatly and money for expensive pressure cooker, jars and lids accessories. It's a great option if you just want to try mushroom cultivation with ease.

Actually Shroomok suggests to handle the whole process by your own. It will be cost effective for long term mushroom cultivation hobby

At this point our grain substrate is ready for sterilization

But before we need to make one more preparation step — STEP 4. DIY Jars and Bags for grain substrate