This discussion happened on the 🆘contamination-id channel between members of Shroomok Discord Growers Community.

The main topic is a Green mold contamination, possible reasons of it, pros and cons of sterilization & pasteurisation for bulk substrate.

In all the quotes, the original spelling and punctuation has been retained.

Let's get started and check out important points from the members of Shroomok Growers Community!

learnhouser1: Anyone know what happened here any way to bring it back or should I throw this all out ! 1st time 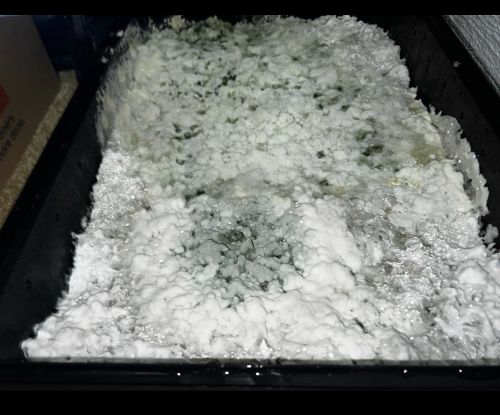 You never learn all the way until you fail!

Too much humidity maybe? Or I just need to be allowing more air and fanning more often? 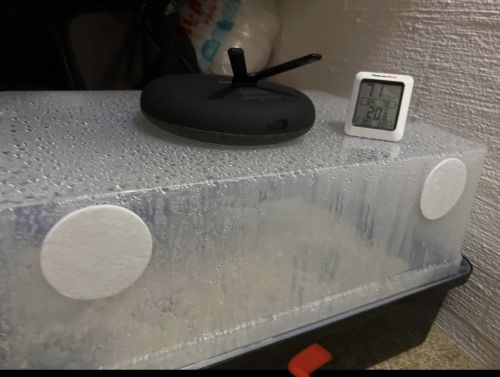 So great example of marshmallow texture around green area

GT: That is Trich… either toss it or bury it in the yard.

learnhouser1: Thanks guys ! Any idea what could have caused it?

learnhouser1: I bought the bulk substrate from ***! Looks like I’ll never buy that again thanks for the response I really appreciate it

Shroomok: We don't discuss vendors/shops here. Check out the other reasons also, bulk sub is the 1st vector of contam

ʂƙı℘ɬཞı℘℘ıŋ: Did you do your own spawn or buy the grains pre made?

learnhouser1: I purchased the grain and the bulk substrate . Everything was fine this is about 2 months in. Grain spawn pure white then moved it to the max yeild bin mixed in bulk substrate and everything has looked good for 3 weeks in the bin pure white. I just turned the light on couple days ago and now this. I may have waited to long to induce pinning . Trial and error I’ll just try again ! 😇😇

ʂƙı℘ɬཞı℘℘ıŋ: Did you iso wipe bin before using?

learnhouser1: Oh yes multiple times thank you. I opened the bin a couple times to take a picture other then that it’s been closed for weeks

ʂƙı℘ɬཞı℘℘ıŋ: If you had a PC you could sterilize substrate again to make sure it was good

learnhouser1: Good idea re sterilization of the bulk substrate I’ll do that!

GT: You CAN sterilize, but I prefer to pasteurize. Think of your sub as a sponge… an empty sponge can suck up more stuff (good and bad), but if you pasteurize, you are left with some good and no bad with less room for the bad to propagate. Ya feel?

learnhouser1: A real big nice pressure cooker and bal jars are gonna be my best friend soon seems like ! Perfect thank you sir

ʂƙı℘ɬཞı℘℘ıŋ: In my opinion cubensis doesn’t benefit from any of the leftovers from the pasteurizing process . Why leave any competing organisms. Cubensis will colonize a sterilized substrate easily with no issues or competition.

Why take the risks

Not saying it won’t work but there are better options

learnhouser1: Interesting 🧐 I think I may have just not had any fresh air exchange. I’m gonna hook up a air pump next time so the air isn’t so stagnant.

Shroomok: We can use sterilized and pasteurized bulk substrate - that's true

Sterilization is a rendering of substrate free from viable microorganisms (bacteria, fungi, mold spores) as by the use of a high temperature in pressure cooker for heat sterilization (250°F or 121°C at 15psi for 90 mins).

Pasteurization or pasteurisation is a process of preservation in which substrate is treated with mild heat, usually to less than 212°F (100°C), to eliminate pathogens and extend shelf life.

However we usually use pasteurization for bulk, because 140F (+60C) for at least 30 mins kill molds (trich particularly) and we save useful microorganisms in soil, that support mushroom grow and inhibit molds For spawn we use sterilization only, because not enough to kill molds in grain. We need to kill bacteria and endospores of bacteria. It is possible with high temperature for a long time (to increase temp we increase pressure)

ʂƙı℘ɬཞı℘℘ıŋ: Yes both methods can be used. I have done plenty each way and my experience shows me that the pasteurized substrate has shown more contamination issues than my sterilized batches so given the evidence by experience I go with sterile methods and give my mycelium a blank canvas to start with then taking the risk. Like I said my opinion.

Shroomok: any sterilized soil/grain unprotected and so "sweet area" for all microorganisms, they try to be the first settlers and they fight for a place to be the first

ʂƙı℘ɬཞı℘℘ıŋ: Just the same you wouldn’t just pastuerize grains you want them sterile.

Shroomok: Here we have only one way (I mean for grain)

ʂƙı℘ɬཞı℘℘ıŋ: You don’t want the competition either way. You want your mycelium to be the winner so why not give them the best chance at winning the fight.

I see a lot of new people to the hobby and their failure rates are high because of improper technique. If they are to pastuerize then they need to know the process to do it for a successful grow

If you are just doing coir only with no additional nutrients than pasteurizing will be fine. Even commercial growers have to sterilize any nutrient rich/ hardwood substrate to eliminate all other competitive organisms.

Shroomok: I also used both options for bulk/casing and both work for me

It is supposed that sterilisation treatment due to high temperature and the cooking effect, released nutrients that benefited the green mold.

It is also considered that the reduction of the natural microbial flora of the substrate by the sterilization action increases Trichoderma sp. opportunities to colonize the substrate because of a lower presence of competitive micro flora which reduces the possibility of mycelial growth. Bacterial strains can inhibit the growth of Trichoderma sp by production of volatile organic compounds (Mackie and Whetley, 1999) or by releasing antibiotics (Nielsen et al., 2000) https://www.ncbi.nlm.nih.gov/pmc/articles/PMC4323299/

And remember about pH adjusting for bulk and casing, because trich love acid soil. More about it here: How soil pH affect Trichoderma

Rehydration in alkaline water also can be a preventive measure

ʂƙı℘ɬཞı℘℘ıŋ: Yes sterilizing produces a clean slate. Afterwards any competition can take hold of it but that being said at that point there is no trichoderma or anything there . You would have had to introduce whatever contamination or mycelium for it to take hold. If your spawn is clean then rapid colonization of the sterile substrate would occur.

Shroomok: Yeah, clean state and clean environment is the main difference with natural environment. That's why we keep everything sterile just for one microorganism we'd like to get

Or a crowd of other 'guys' will occupy everything

learnhouser1: Well I’ll go ahead and try both then sterile and pasteurized bulk substrate. I just bought a pressure cooker. So hoping this will never happen again. Also my air in the bin was extremely stagnant. I basically made the perfect environment for trich to grow. Next I will be placing a glass cup and water with air stone and air pump. When I’m ready to induce pining I’ll turn it on couple times a day for a couple minutes or so. Excited to see my next run and if I can beat the trich! Thanks guys !

I have a picture from just 5 days ago and everything was fine. It’s crazy how fast things can turn ! 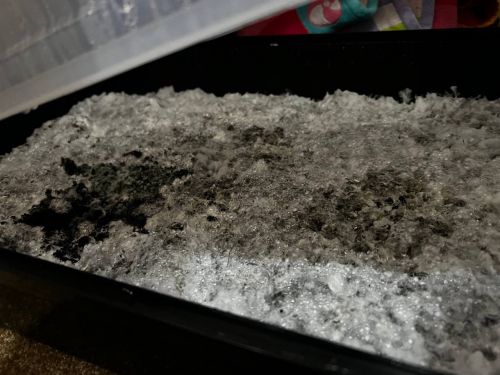 Shroomok: You already had trich 5 days ago on the area without mycelium, it's so common case

Keep us updated and good luck 🤞