Story about the most popular Psilocybe Cubensis mushroom in the world. All about Golden Teacher strain: potency, effects, tripping, microdosing and cultivation 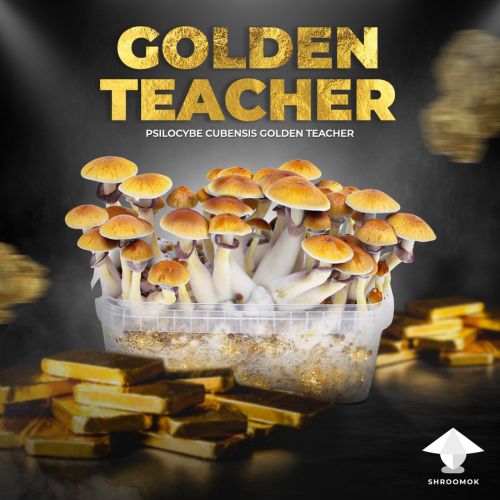 Welcome to the short shroom-story about one of the most popular psilocybin mushroom strains. Here we are going to simplify the science and demystify marketing. So you are able to make the best informed choice you possibly can for cultivation, microdosing and psychedelic trips

Golden Teacher (also known as GT mushroom) is a classic strain of Psilocybe Cubensis magic mushrooms. It is one of the most famous psychedelic fungi in the world.

Let's figure out the features of this strain. Traditionally take a look at the boring (but so important!) scientific classification of the Fungi Kingdom and the place of Golden Teachers in it. 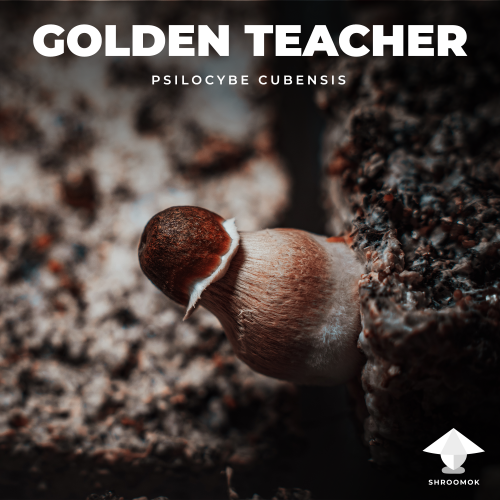 For the latin naming system uses the following format: genus (e.g. Psilocybe) followed by species (e.g. cubensis). If you’re looking at spores and the latin names are different, then you know you have different species. Remember, as you could never cross a fly with a human, you couldn’t naturally cross Psilocybe cubensis with Psilocybe natalensis.

But strains should all originate from the same species (usually Psilocybe cubensis) and can interbreed freely.

The origin of Golden Teacher

In 1948 the German scientist Rolf Singer in his publication in the journal "Sydowia", transferred it to the genus Psilocybe. 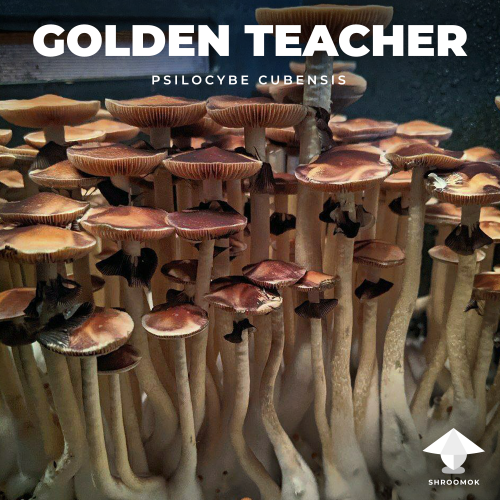 As for the strain of Golden Teacher its exact origin is unknown. It is believed that "golden teacher" appeared in the Florida desert in the USA in the late 1980s without any claim to authorship.

Golden Teachers have a unique appearance with golden-yellow caps. They are brightly colored around the edges with dark orange gradient in the center of the umbrella. 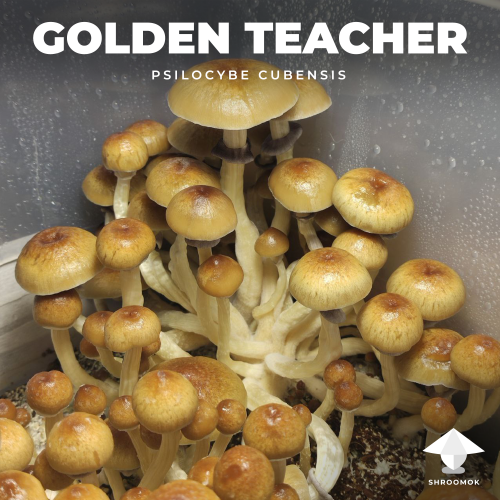 A scattering of light gold-colored flecks can be seen throughout the cap. 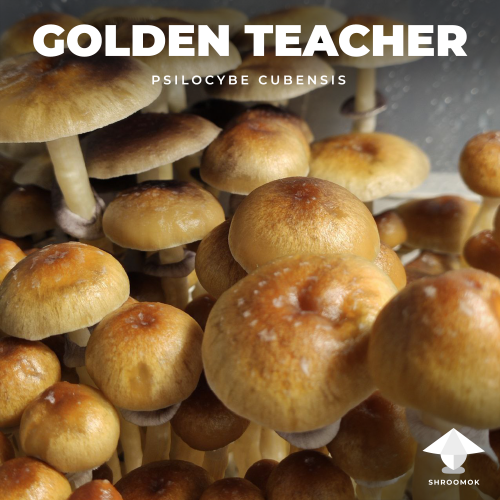 This is how the peculiarities of the color palette determined it to be GOLDEN. 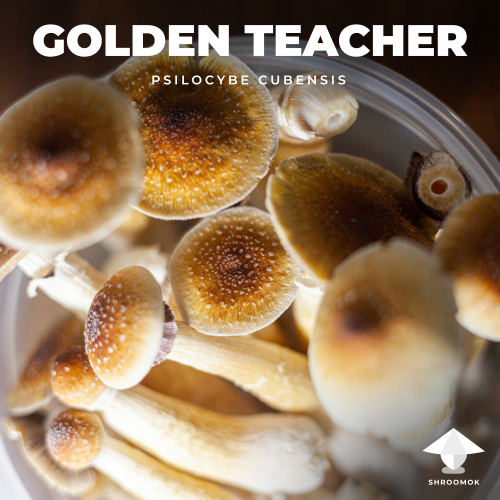 Even after drying mushrooms perfectly preserves its golden color. Check out: How to dry, freeze and store magic mushrooms 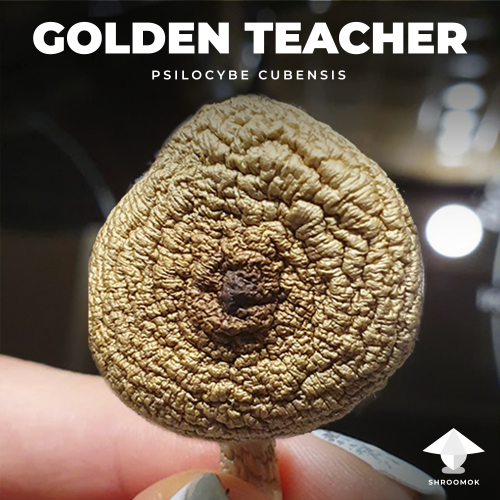 By the time the spores mature, the cap cracks along the edge and turns a red-gray-brown color. The cap diameter is often about 3-5 cm, sometimes up to 8-10 cm. 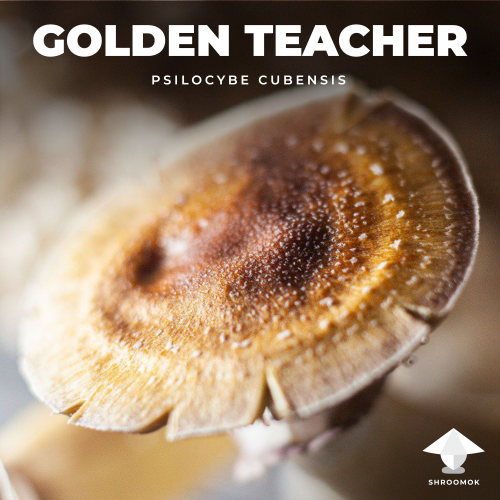 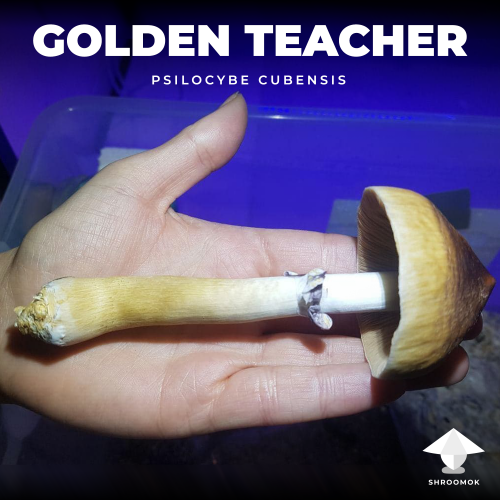 Size and yield depend on the flush of fruiting, grower's skills and cultivation techniques. 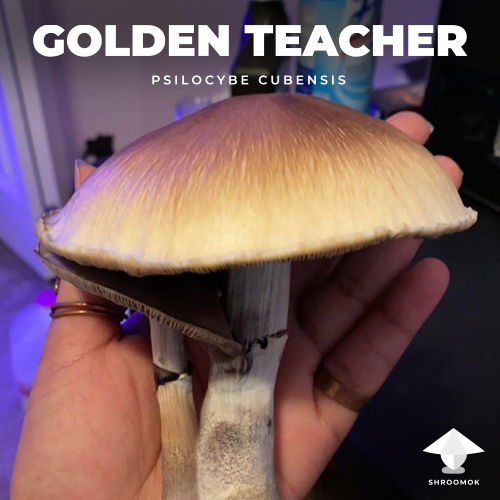 Why Golden Teacher is the most popular strain? 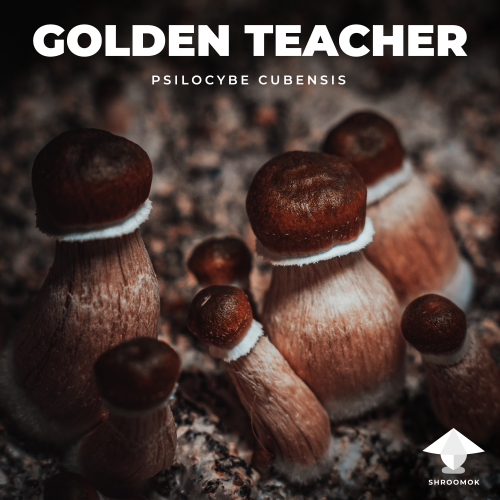 Golden Teacher can be rightfully proclaimed the most important wizard among all P. Cubensis strains. But why?

✅ Golden Teacher is one of the earliest strains in home cultivation and is considered a veteran of amateur growing.

✅ As a result, the greatest number of grow-reports and trip-reports are related to Golden Teacher.

✅ It is traditionally believed that any newbie grower can cope with cultivation of "golden teachers" and doesn't matter which cultivation technique you'd like to use. This is true, but it doesn't mean you can neglect the elementary rules of sterility and cultivation basics. These rules are the same for all kinds and strains of mushrooms.

✅ Golden Teacher is one of the most hardy strains with a good strong genetic basis for mycological experiments.

✅ Mutants and different hybrids are created on the basis of Golden Teacher, which replenish the variety of strain collections every year. These include a group of albino mutants such as Leucistic Golden Teacher (Lucy GT), a group of popular mutants True Albino Teacher (TAT) group - Yeti, Wombat, Jack Frost, Gandalf and over 30 more mutations involving the powerful genetics of Psilocybe Cubensis Golden Teacher.

We'll talk about variety and cultivation features of modern mutants in next article. Stay tuned for more updates! In the meantime, a few photos of these beauties as an example. 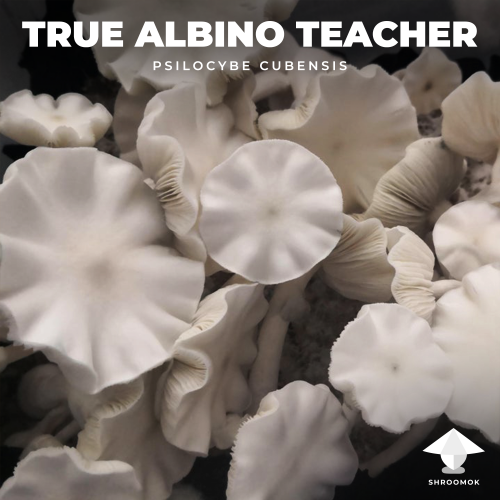 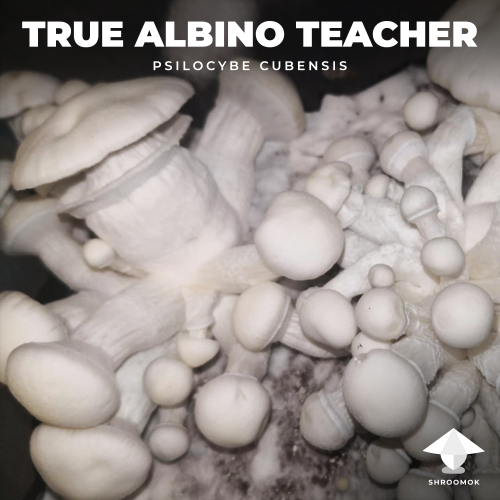 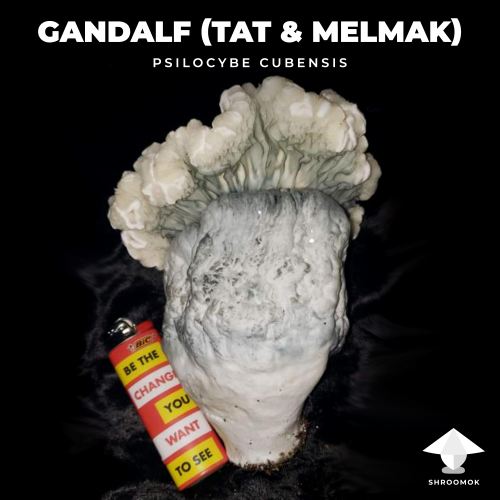 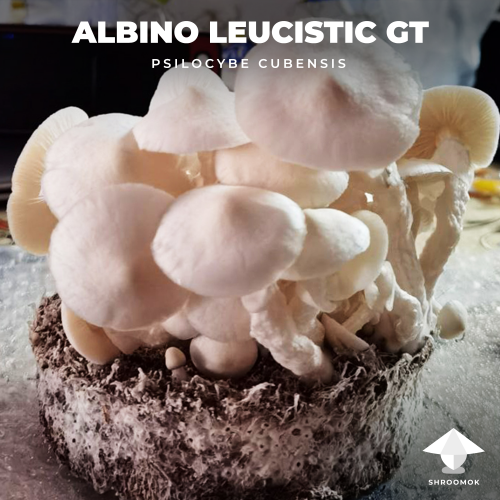 Is Golden Teacher suitable for noobs in mushroom growing?

Any strain of Psilocybe Cubensis is newbie-friendly. Golden teacher is ideal for beginners with "zero" experience in mushroom cultivation. Just follow Shroomok guide step by step.

How long does it take to harvest GT mushrooms?

From inoculation to the first harvest it takes about 28-35 days. GT is one of the fastest and most active strains among P. cubensis mushrooms.

How many GT mushrooms can I pick?

You can get about 150-400 grams per 1 liter of substrate. It is not the most productive strain. Especially if you cultivate mushrooms with multiculture (spore syringe or liquid culture).

Advanced growers increase yields by isolating pure culture on agar, but this technique is not recommended for beginners. For agar manipulations you need to understand basic mycological principles and have at least one success grow-story.

How many flushes can I get with Golden Teacher?

Golden Teacher usually produces an even number of mushrooms in each of the 4-5 flushes of fruiting.

With GT, it is not always possible to get a powerful first flush (from multiculture). However, after rehydration, the 2-nd and 3-rd flushes always please beginners.

On the 4th-5th flush the yields go down just like with any other strain of P.cubensis.

What tek is good for Golden Teacher cultivation?

Any growing tek are known today is perfect for GT cultivation. The sky is the limit!

🔴 Check out: Stuff to buy and Shopping lists to start mushroom growing 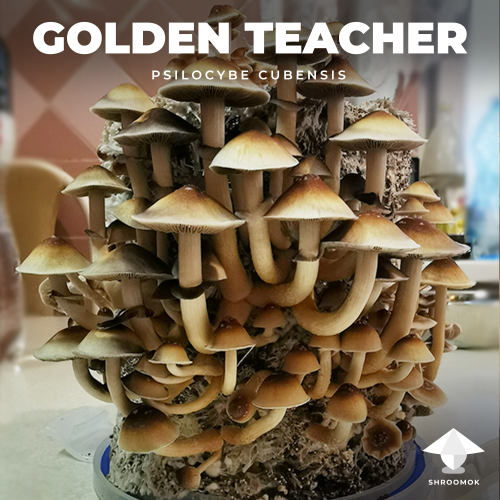 🔴 Check out: Bottle-tek or how to grow mushrooms in plastic bottles 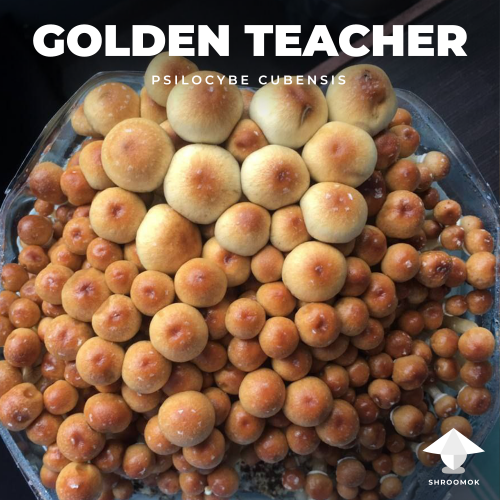 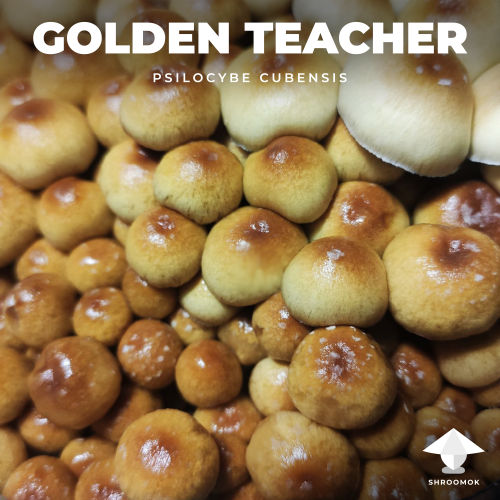 🔴 Check out: DIY Monotub for mushrooms 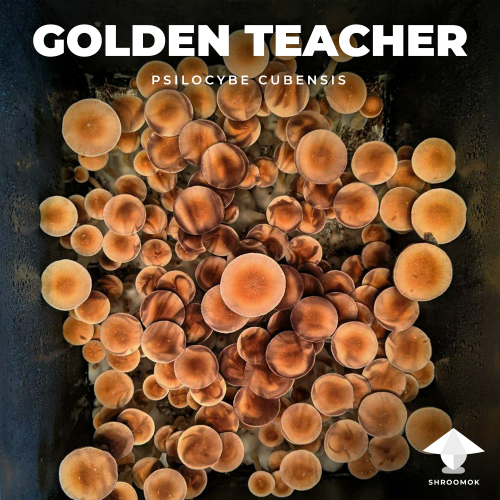 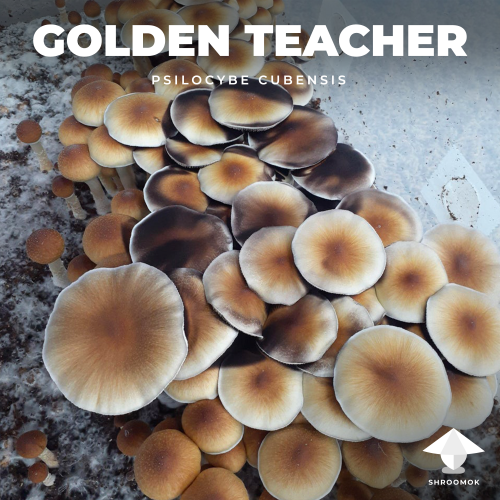 Dry GT mushrooms are great to use for microdosing.

Recommended for beginners at medium dosage (1.5-2.5 grams) who are insecure in psychedelic experience. At this dosage and with the right preparation before tripping users report about calm, relaxing experience, with soft visuals. 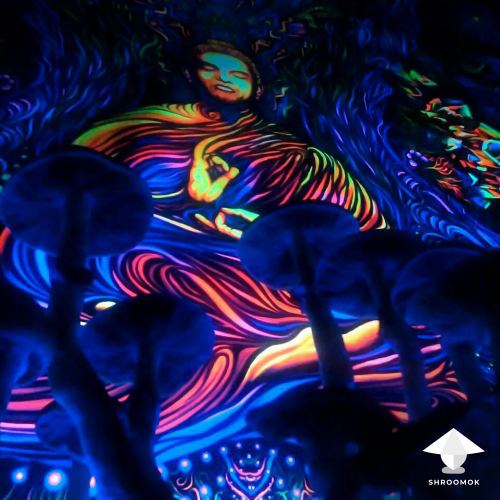 🚀 Average trip duration: 2-3 hours of deep tripping with an average dosage of 1.5-2.5g of dry mushrooms. Post effect for the next 3-4 hours.

🚀 Effects. Only copywriters and psychonauts know all about effects based on subjective feelings. So once again we turn to the "experts":

Golden Teacher take you by the hand and lead you to enlightenment. They will help you connect to your origins, to dissolve, to know the true nature of yourself.

Golden Wizards will help you heal your mind and spirit and give you the beauty of the visuals...

Golden teachers often reward their travelers with wise lessons that leave their mark even the trip is over...

Now to be true and honest.

Let me remind you, there is currently NO scientific data or studies on the difference in effects of P. cubensis strains!

All descriptions you find on the Internet are copywriter's articles, at best are subjective evaluations and experiences of psychonauts.

All of the above and 1,000 other factors significantly determine the flow of a psychedelic trip.

Remember! Every psychedelic experience you have will be unique. You will never have 2 identical trips with the same strain and with the same dosage.

It will always be a totally new adventure, new experience and a new YOU!

🍄 Buy Shroomok a mushroom as a donation, ask questions in comments to donation and say something nice!

Have a happy growing and safe trips!