Yellow mycelium or Yellow liquid on mushroom mycelium: contamination or not?

Sometimes you can observe healthy mycelium with small amounts of clear yellow, yellowish, orange or brown liquid forming on the surface of the mycelium. Examples in short video:

It can be noticed in spawn jars during colonisation period 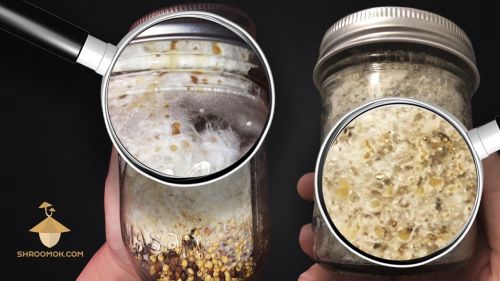 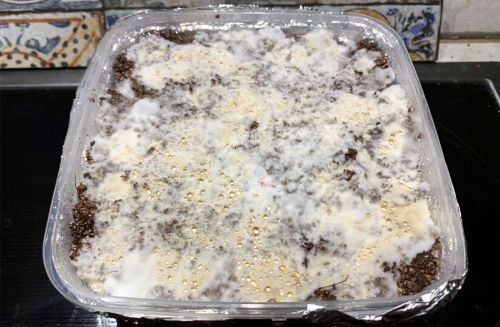 What is it? Is there something to worry about?

What is mushroom metabolites?

🔬 Biochemical analyses of the exudates showed that acid phosphatase, β-glucosidase, acid and alkaline protease, RNase polygalacturonase and cellulase enzymes as well as oxalic acid and ammonia were present

In short and simple metabolites consist of acids, exopolysacharides, waste products and antibiotics, which are naturally secreted by mycelium cells.They can be found on different species of mushrooms: wild mushrooms, magic mushrooms, gourmet and edible mushrooms.

How to determine mushroom pee?

✅ NO smell, except smell of soil and mushrooms. Fermented, rotted, cider, sweet and sour, stale, yeasty, smell of dirty socks — those are clear signs of contamination. 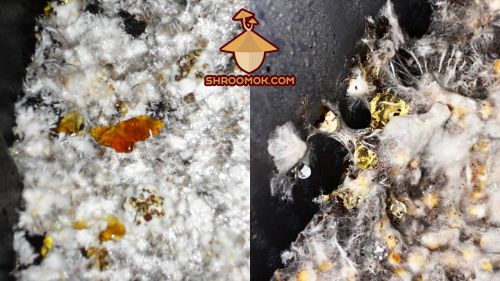 Orange and yellow metabolites on mycelium 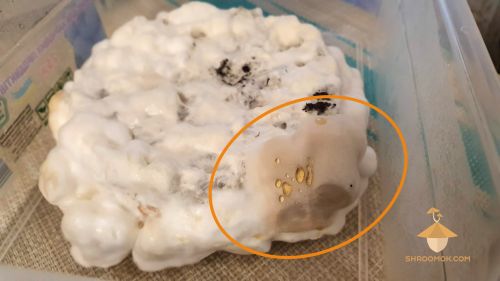 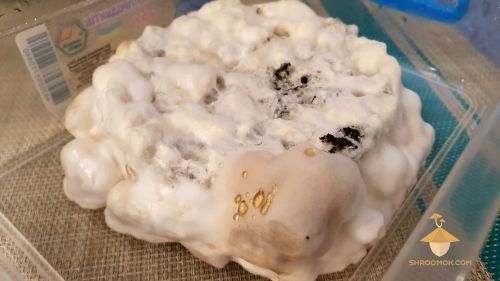 Metabolites is a immunity reaction to:

🆘 lack or excess of nutrients in the substrate

🆘 a symptom that mycelium is fighting with pathogenic microorganisms (bacteria, mold). In this case you can see yellow or brown lines like borders between them

🆘 this also happens if you mix several strains of mushrooms. Their colonies struggle with each other and create yellow/brown borders between them

🆘 stroma and overlay are accompanied by mushroom pee

What is the strange yellow-brown line on the mycelium?

Let's figure out one case from Shroomok Discord Community. This is a great example to show you metabolites sectoring.

Question: Strange yellow-brown line on the mycelium. Anyone know what this could be? 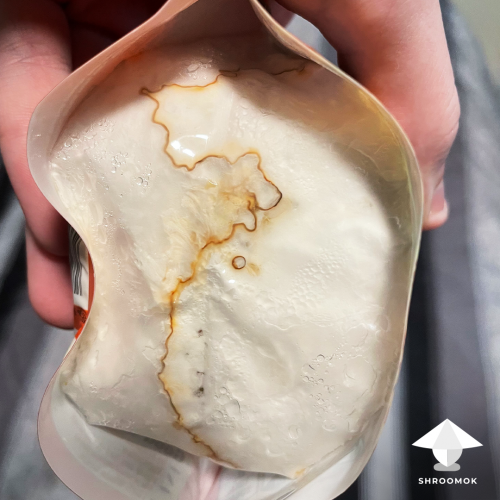 Here are mushroom metabolites and sectoring process. Why did this happen?

In this way different colonies of mushroom mycelium or bacteria/mold can temporarily share territory and useful nutrients in the substrate. Since we are dealing with two different microorganisms or different mushroom colonies that compete with each other, usually clear boundaries form between them where they cross aka sectors.

I don't see bacterial or mold contamination so far. Just a struggle between mushroom relatives. As a result we see such immunity reaction of mycelium — metabolites.

On the photo below more intense metabolites. It is a sign of struggling with pathogens (i.e. mild bacterial contamination). Spawn can be used for the next steps of cultivation, but you should check it thoroughly (smell, colour) and remove weird areas 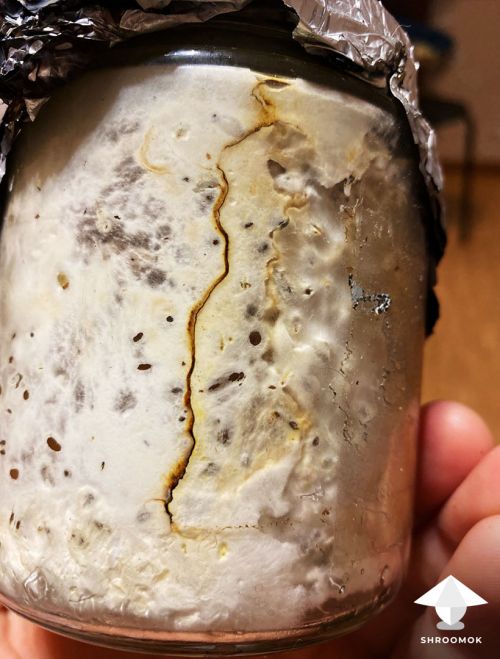 Mushroom metabolites and sectoring as a sign of struggling with contamination

Yellow mycelium as a type of mushroom metabolites

Occasionally, snow-white mycelium can turn beige, yellow or even brown during colonisation period in the jar or during fruiting period in the fruiting chamber. It is also a kind of fungal exudate — waste products of mycelium. 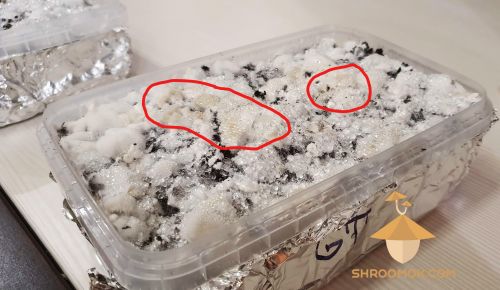 This case can be as a reaction of fungal immunity to a minor contamination. It means mycelium struggles successfully! Observe and be attentive. 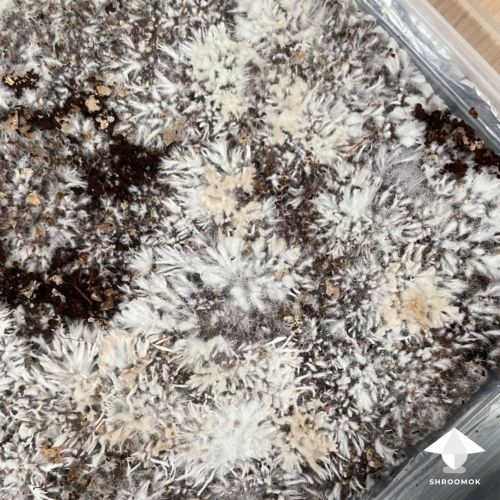 Yellowish mycelium is not contamination

Minor fungal pigmentation is very common in mushroom growing and nothing to worry about! 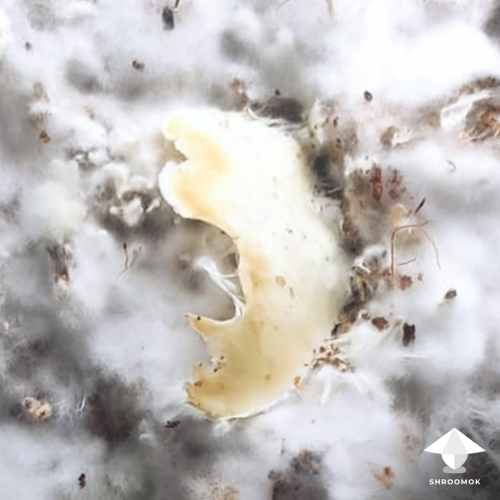 Yellow mycelium is NOT a contamination here

If mycelium ingests excess of anything that may become toxic enough to eventually harm, disable or kill it, mycelium produces waste exopolysaccharides as antimicrobial agents, acids, excrete enzymes and tries rid itself off that excess.

Metabolites is a reaction to stress or response to mild contamination (especially bacteria). Overlay or Stroma is often accompanied by mushroom urea.

Mushroom metabolites is a natural mushroom antibiotic and immunity reaction. This means your mycelium is fighting off pathogens or stress. It’s not contamination itself! 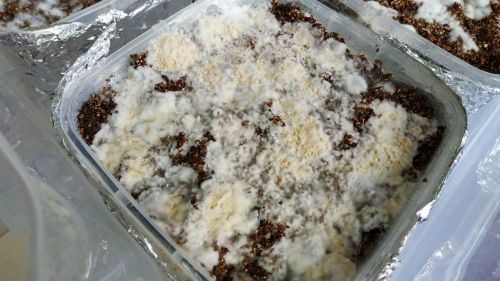 Metabolites or exudate as immunity reaction of mycelium

It seems similar to metabolites, but Mycogon has specific features. An amber liquid with a rotten smell oozes from pins, primordia and clots of mycelium. 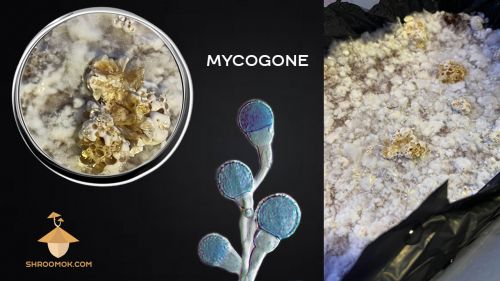 🔴 Newbie cultivators confuse pigmentation with Aspergillus yellow spp. (Aspergillus flavus). This mold has yellow powder without any liquid on mycelium. 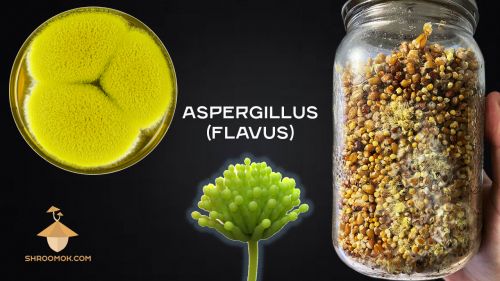 If you find this guide helpful you can 🍄 Buy Shroomok a mushroom as a donation and say something nice!

Have a happy growing and healthy mushrooms!