Cobweb Mold contamination is one of the few molds are possible to treat. Cobweb disease symptoms. Cobweb treatment guide. How to prevent Cobweb contamination 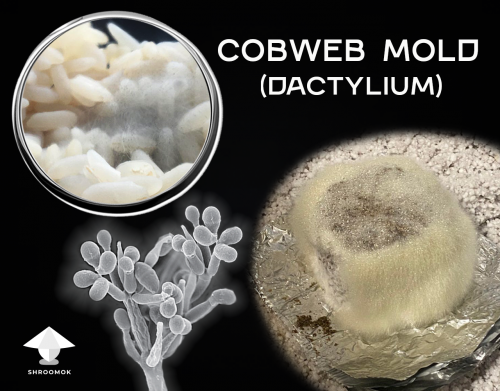 Cobweb disease: how to identify and get rid of

Cobweb mold: how to identify, how to prevent and how to treat it

What is cobweb mold?

Cobweb is a fungal disease of commercially and home cultivated mushrooms. It isn’t just one species of mold. It is more like a closely related group of mold species.

Each species of cobweb mold is so similar to its brethren that only genetic testing can tell them apart.

Symptoms of disease can appear on the very first steps of mushroom cultivation. For example, in spawn jars during colonization period. 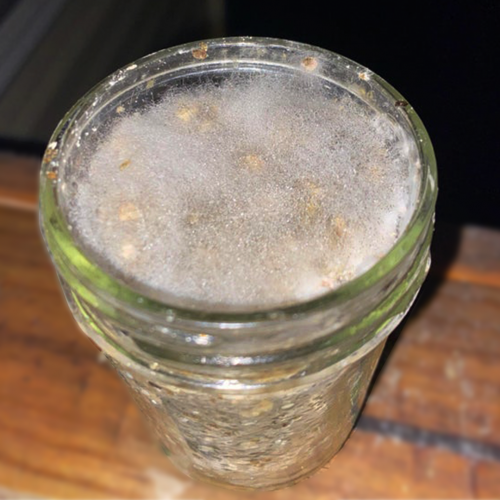 During pinhead initiation and fruiting period, when pins and primordia start their active development. 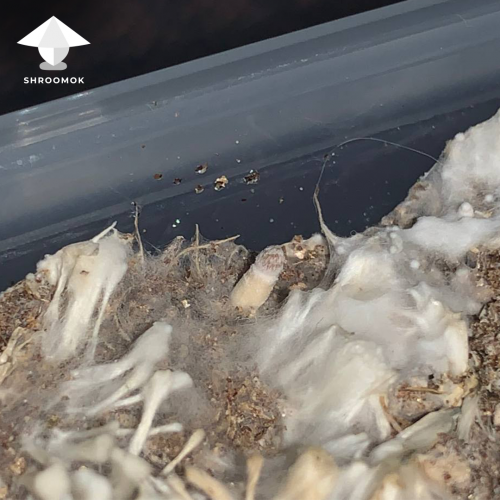 ❗️Cobweb spores can "sleep" in casing layer for a long time and wait for the favorable conditions to activate them. That's why cobweb most often develops in later flushes.

How to identify cobweb mold?

It appears on the casing layer as small white spots. Like cottony areas. Soon cobweb envelopes mushroom mycelium, pinheads and even small fruit bodies with a soft fluffy mold mycelium that causes a soft rot. 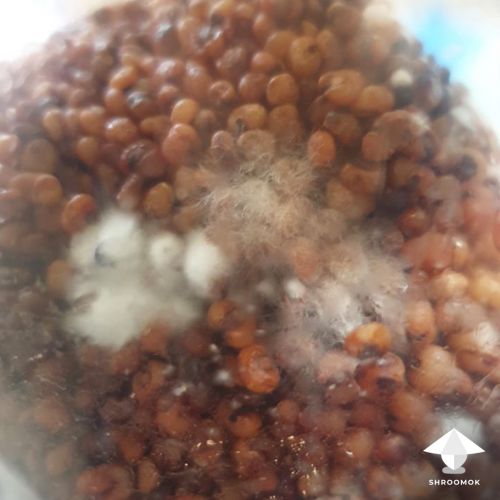 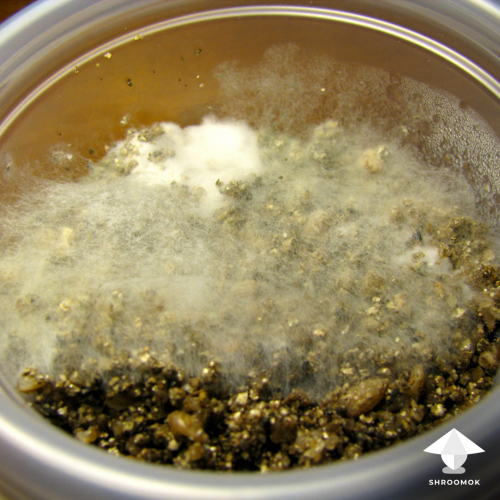 🔴 The one that sticks out is the speed of growth. Because cobweb grows extremely fast, colonizing mycelium and mushrooms on its way. A small patch, the size of a coin, grows over the entire top layer just in 1-2 day and turns into fluffy layer. 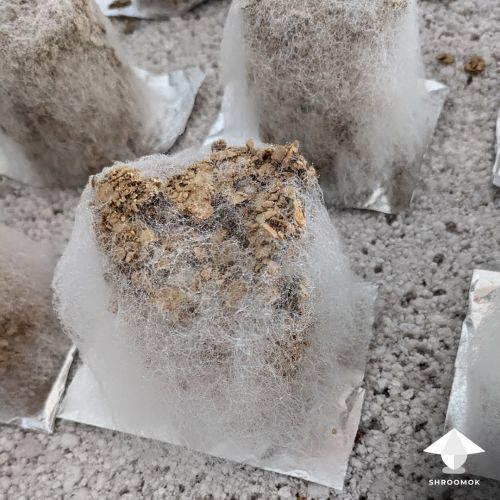 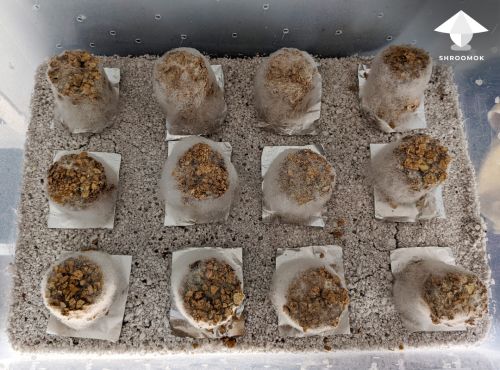 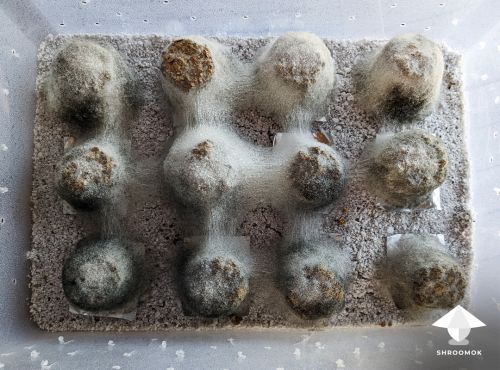 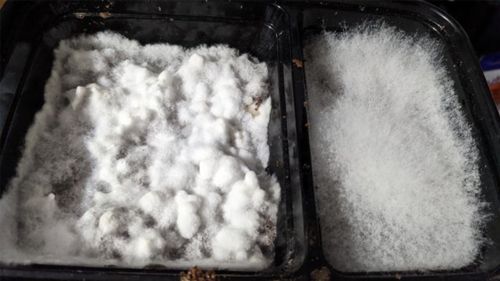 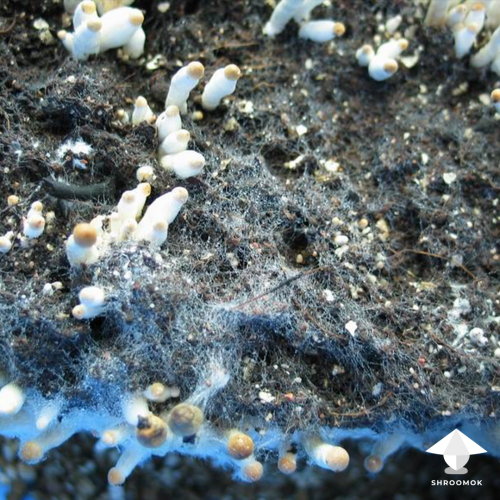 Cobweb mold has thin hyphae, while mycelium tends to be thicker ropes 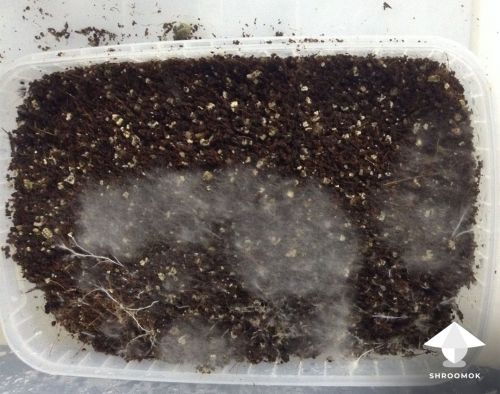 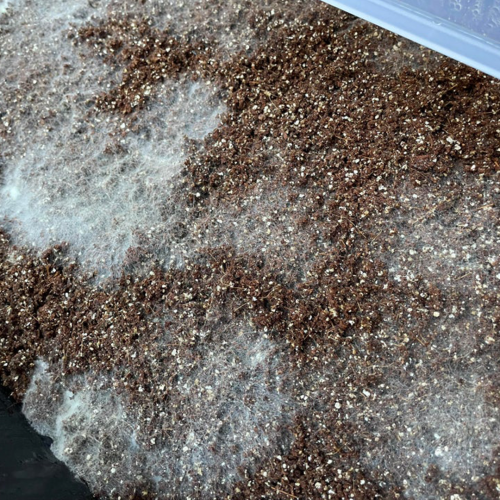 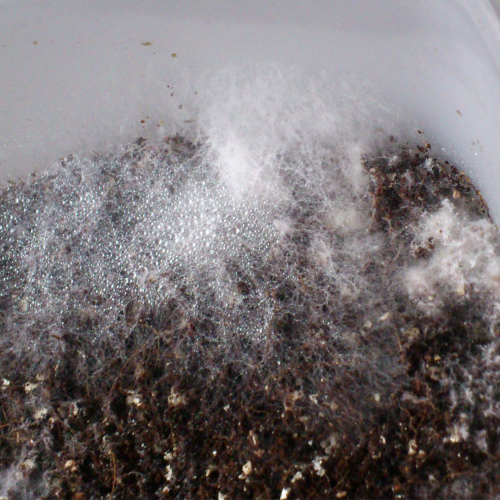 🔴 In the later stages of disease, when molds release spores it turns red-purple and change to yellow or orange. 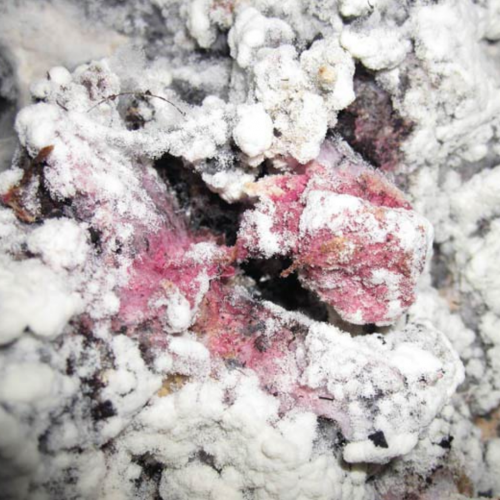 ❗️ Such bright rich colors distinguish cobweb from another very similar mold is called mucor. Mucor has black beads at the tips when releases spores. This mold we'll figure out soon in the next article. 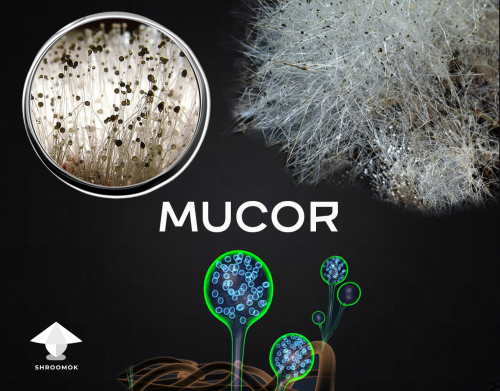 Color and hyphae differences of mold and mushroom mycelium are hard to identify for newbie growers haven't seen them side by side before. Your job is to know which is which. Let's figure out a few illustrative cases.

✅ Mycelium and mushroom cake looks grey, because the top layer is dry out. That's why mycelium have blue-grey color. There is no cobweb disease! Such mushroom cakes need rehydration. 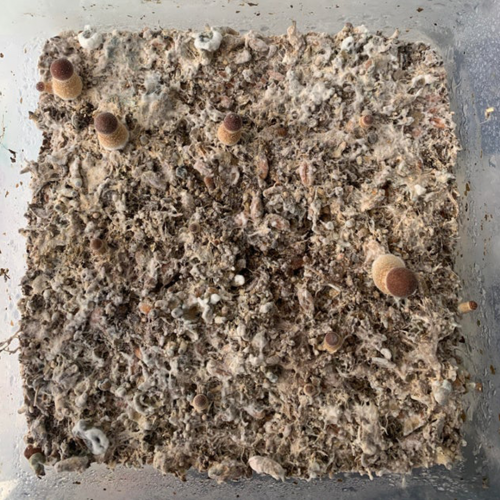 Dehydrated mushroom cake. Mycelium have grey color, but it's not contamination 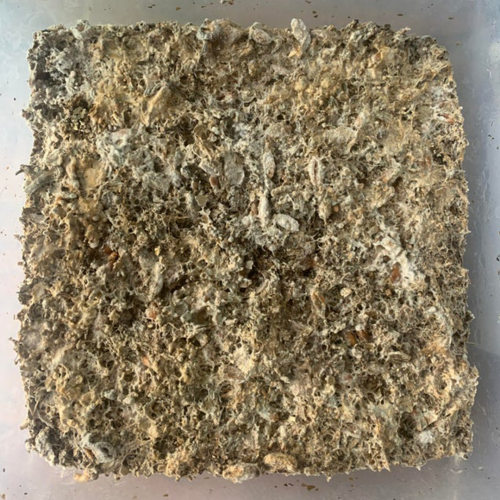 Dehydrated mushroom cake. Mycelium have yellow-grey color, but it's not contamination 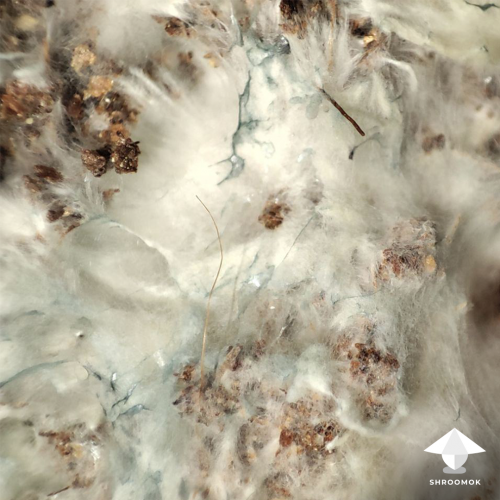 For more examples of mushroom and mycelium bruising check out:

✅ A common mistake to misidentify a weak strain of mycelium as being cobweb mold. In fact everything is good in the example below! Photo shows a healthy mycelium of different types (tomentose and rhizomorphic mix). 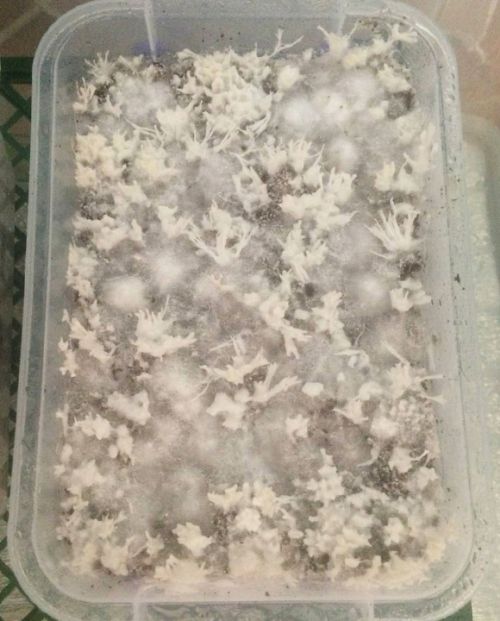 ✅ Fuzzy feet is a symptom of lack of fresh air exchange, but it’s not a cobweb contamination. 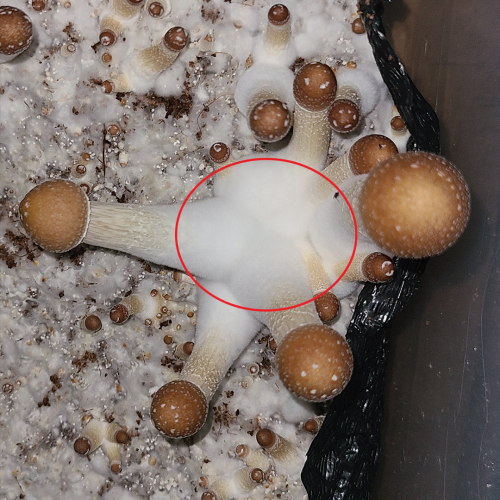 Fuzzy feet = lack of oxygen. It's not a cobweb mold 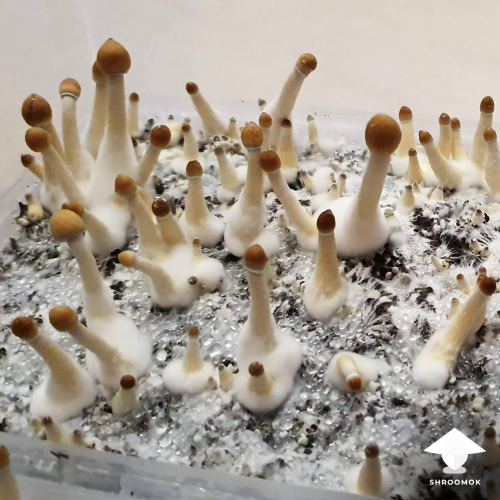 Fuzzy feet is NOT contamination

🔴 Recommended: Why Mushrooms too Leggy, Fuzzy Feet and White Dots on Caps

⛔️ Lack of FAE (fresh air exchange). Cobweb molds enjoy stagnant air. Mushroom mycelium need fresh air. Here is one more reason why we need to ventilate our fruiting chamber. It’s not only because of the high CO2 level, it’s also because all molds like stale air.

⛔️ Cobweb like combination of high relative humidity (90% and above) + high temperature (+23°C or 74°F and above) + lack of fanning (less than 3 times/day for growbox or monotube with dead areas).

⛔️ During sporulating phase mold easily spreads in the air when you introducing fresh air and misting growbox or monotube.

⛔️ Mushroom aborts is another common point of origin for cobweb mold. There is a clear a correlation between the development of cobweb mold and the presence aborts. However, it is hard to say that the aborts are the direct cause of cobweb disease or even if the cobweb mold was the underlying cause of the aborts.

✅ Sterilize or pasteurize bulk substrate, because it may contain spores of cobweb mold. In fact it's very easy to kill this mold. At a temperature of +50°C or 122°F for 30 minutes cobweb spores die. This means that cobweb can easily be prevented by proper sterilization or pasteurization.

✅ Keep all mycological manipulations as sterile as possible.

✅ Maintain favorable fruiting conditions: fresh air exchange, temperature, humidity, light. Remember, spores of cobweb mold can sleep for a long time in casing layer, but as soon as you have stagnant air in fruiting chamber mold is there.

✅ Remove all mushroom aborts any time you are harvesting mushrooms.

What to do if mold has ALREADY appeared on your mushroom cake?

The best and most common advice for treating any kind of mold is «Throw it away immediately! Avoid spreading spores in the air and on healthy mushroom cakes!»

But we have good news that give us hope!

❇️ Actually, cobweb is considered a treatable disease. It is one of the few molds which can be slowed down or even destroyed with 3% hydrogen peroxide solution (Н2О2)

🔴 Bright color is a late-stage for any kind of mold. The color indicates a sporulation process that is no longer treatable and is a huge risk of spreading contamination. It's too late for treating!

Bright color are cobweb spores. Too late for treatment!

Treatment is possible in the presence of mild contamination and only in the early mycelial stage!

If you want to fight with mycelial stage of cobweb you can try the following method.

1️⃣ Spray contaminated areas of mushroom cake 3 times, 12-hour interval between treatments with hydrogen peroxide (Н2О2) solution 3%. It's ready to use solution from the pharmacy, don't dilute it!

2️⃣ Mist not only affected area, but also healthy mycelium around contaminated spots.

❗️The most common reaction you see when hydrogen peroxide is introduced to casing layer is this sort of aggressive fizzing. This is directly caused by the fast conversion of the Н2О2 into its constituent parts, water and oxygen 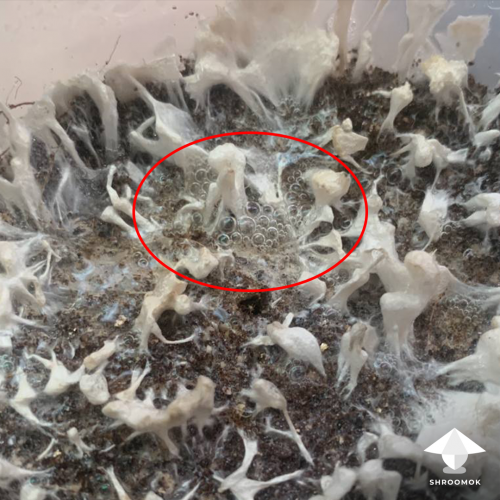 3️⃣ After a series of treatments cobweb mycelium should melt and disappear. If this doesn't happen dispose of contaminated cake! 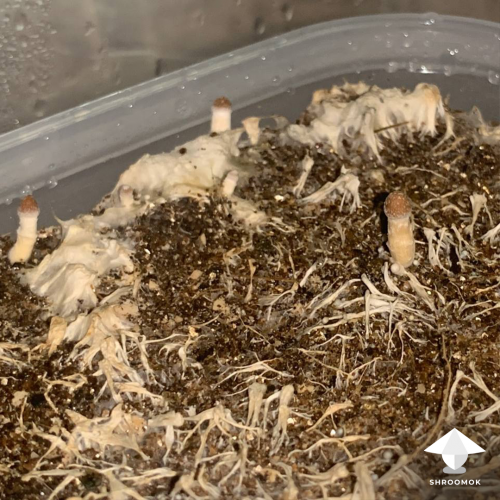 It's a common misconception that hydrogen peroxide only affects cobweb mold. In fact H2O2 reacts with almost any fungus including the mycelium of mushrooms you grow. H2O2 can suspend or completely stop mushroom mycelium growth. Don't be surprised if you get a harvest 1-2 weeks late.

In the case of modest contamination many pins and mushrooms may indeed live and thrive afterward! 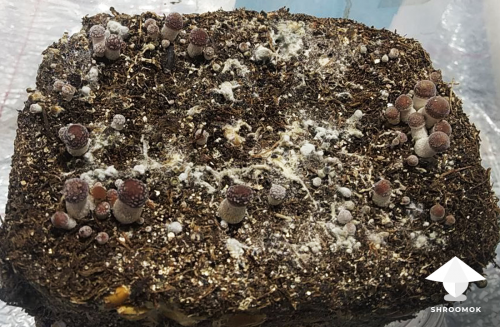 One more example and results of Cobweb Mold treatment 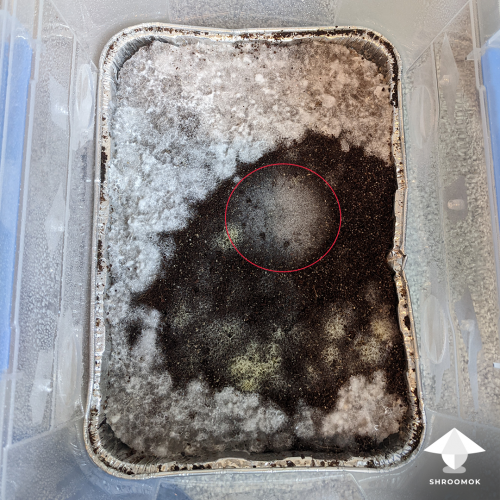 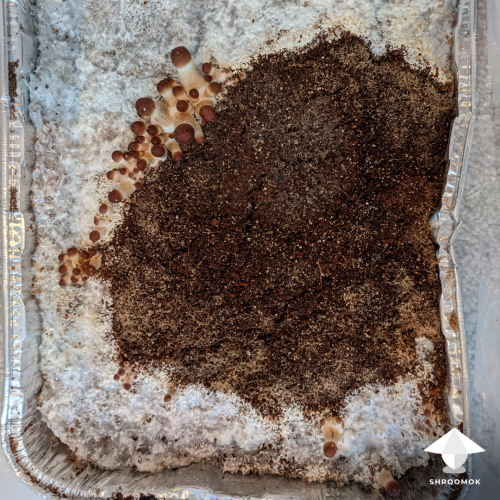 ❗️Peroxide inhibit and kill cobweb mold, however it doesn't mean it won't come back again. Unfortunately it can be a battle till the end

As a result the most effective method of dealing with all species of mold are preventive measures and disposal contaminated cake. But don't give up if you faced with cobweb contamination!

Take advantage of a tried-and-true tip with H2O2 or salt treatment.

Place a damp paper towel over the growth to contain any spores that have not yet released. Then you can pour salt (refined, small fraction) over the paper towel. It helps to eliminate the cobweb mold presence in the top layer of substrate 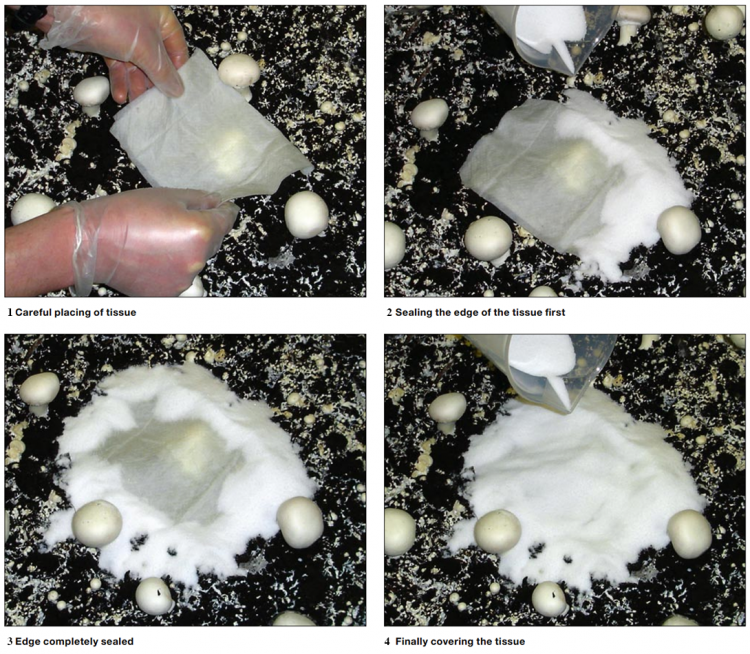 1️⃣ The patches of disease must first be gently covered with damp tissue to prevent the spores becoming airborne.

2️⃣ Then the tissue should be covered with fine grained salt. The salt application should first seal the edges of the tissue to prevent the escape of spores.

4️⃣ Once the edges are sealed, more salt should be applied to completely cover the tissue and underlying patch of cobweb.

Specific control measures to prevent the spread of cobweb mold

To prevent the spread of cobweb contamination during treatment:

⛔️ Never mist growbox/monotub with untreated mushroom cake inside! Misting over untreated areas of contamination will result in a massive spore load being spread throughout the crop.

⛔️ Turn off the air conditioning or ventilation during operations likely to disturb spores or pieces of mold mycelium (e.g. misting and tissue-salting)

Useful stuff on Amazon to prevent or deal with cobweb disease

If you find this guide helpful you can 🍄 Buy Shroomok a mushroom as a donation, ask a question in comments to donation or just say something nice!

You can also request a Personal Consultation with Shroomok