If you find Overlay and Stroma symptoms: cottony, cloudy, mat-like or crust-like dense mycelium. Contamination or not? Why overlay appear? Is it possible to fix overlay and stroma?

Overlay and Stroma in Mushroom Cultivation

The process of cultivation psilocybin mushrooms is not only joy and pleasure. There are also difficulties and failures. Sooner or later every mushroom cultivator comes across them. Here we are going to show you one of the most common problem in the growing process — overlay (aka stroma) and related difficulties.

What is overlay and stroma?

The good one — overlay and stroma are not contaminants. And there are chances to fix the problem.

The bad one — growing conditions for pinhead initiation have not been met. So, you might not get harvest at all!

Overlay and stroma look like the same. Cultivators don't distinguish the difference between these two definitions. And it makes sense.

Stroma is a dense, mat-like growth of mycelia or cushion-like aggregation of mycelium forming on the surface of composts or casings and indicative of somatic (vegetative), not generative growth.

🧬 Such mycelium can absorb nutrients, but can't produce mushroom bodies. At the fruiting stage the cultivator won't be able to influence such genetic changes in any way. But pay attention inappropriate fruiting conditions can be a trigger for awakening genetic changes.

How to identify overlay

🔴 Visually it is a dense snow-white layer of mycelium resembling fluffy cottony clouds. 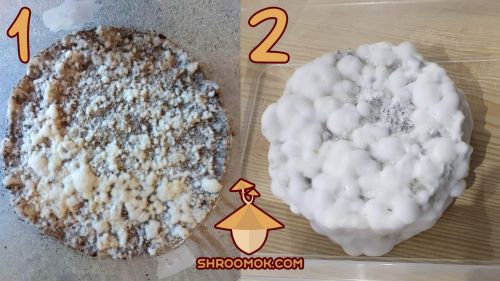 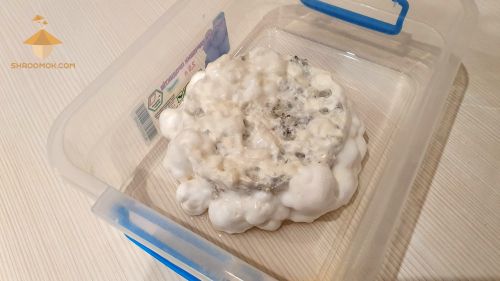 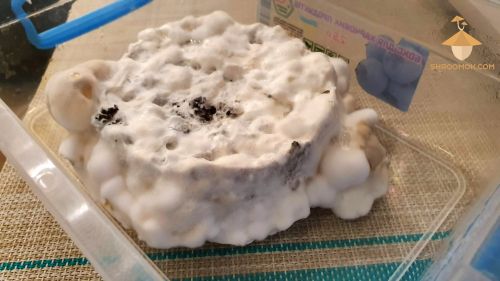 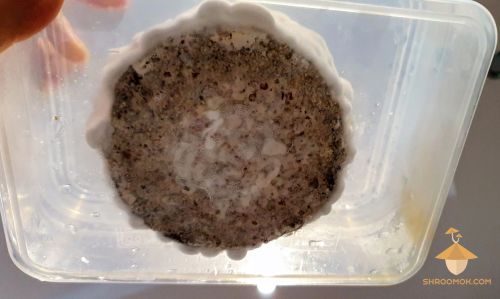 The difference between normal and overlayed mushroom cakes. 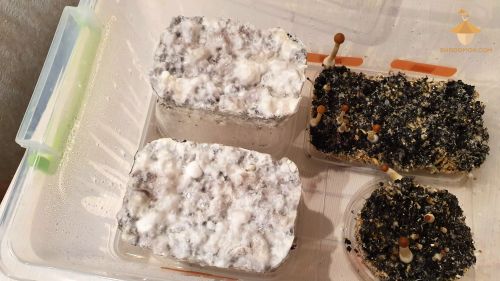 Difference between cakes with fluffy/down-like, Tomentose Mycelium and fruiting cakes with a wiry-type structure, Rhizomorph Mycelium 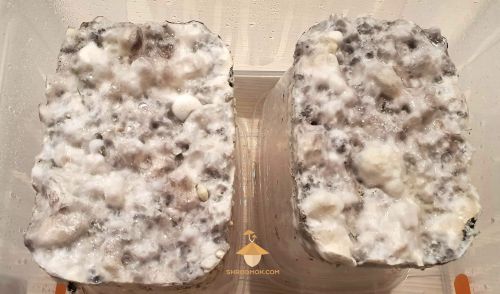 Overlay on the cake with blue-gray psilocybin spots. Problems in growing psilocybe cubensis

🔴 To the touch neglected form of overlay like cotton pads or polyurethane foam. It can turn into a dense dry crust that block mushroom cake and doesn't allow air and moisture to pass through. Overlay often accompanied by Mycelium secondary metabolites or mushroom pee (phase 2 on the photo). 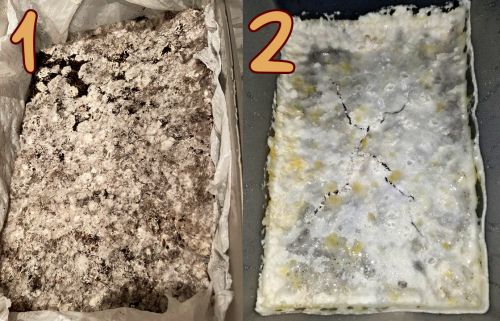 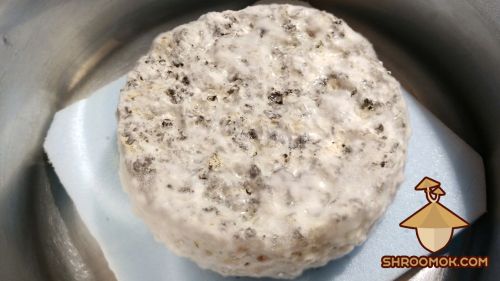 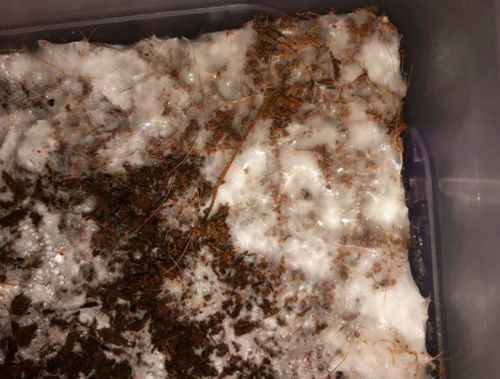 ⛔️ Prolonged vegetative period after spawn run and casing. Overexposure of jars with colonized substrate in the incubator. Thus, an overlay can form even in a spawn jar. 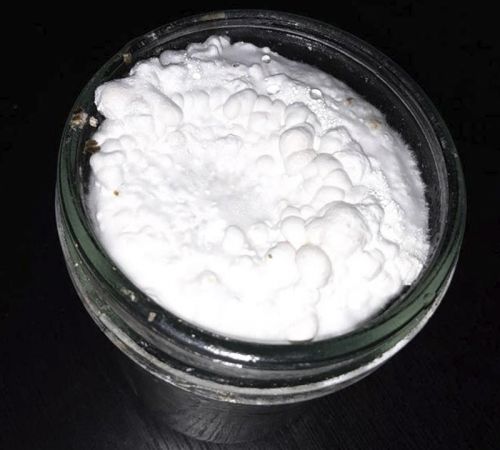 ⛔️ Prolonged time for casing layer colonization. Fruiting conditions should be provided when 50-70% of the casing layer is covered with mycelium. Rhizomorph mycelium can stay in the incubator for a longer period.

Too late start of fruiting period for such mushroom cakes. 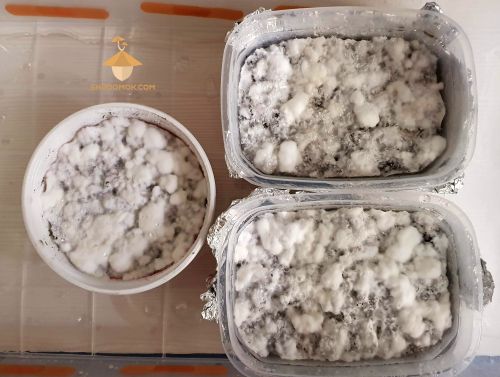 ⛔️ Low relative humidity in the GrowBox or Monotube (less than 90%). 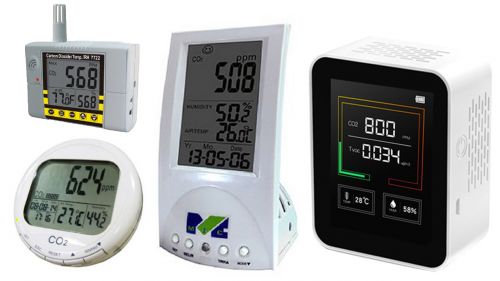 ⛔️ High evaporation rate. The humidity level in the growbox is high, but it is provided by evaporation from the casing layer instead of misting or using humidifier. This way mushroom cake dries out very quickly.

⛔️ Strain degeneration. Many strains from spores may be capable only for vegetative growth. Such mycelium can absorb nutrients, but is unable for pinning and fruit bodies development.

⛔️ Overlay stroma are not simply a disruption of just one fruiting parameter. It is often a complex of several factors:

If you don't decrease the temperature in the growbox/monotube, don't increase relative humidity (RH), don't provide oxygen regularly for mushrooms breathing, mycelium continue vegetative growth like before in the spawn jars and skip pinhead initiation process.

How to fix overlay?

Stage 1 on the photos below are mushroom cakes at the start of stroma/overlay formation. Such a problem can be handled by increasing fresh air exchange every 4-6 hours (but not aggressive fanning) or by connecting an aquarium air pump for introducing FAE 24/7.

Stage 2 - poor or almost impossible to be treated.

How to initiate pin setting

1️⃣ At the first stage of overlay just increase the FAE. Ventilate the growbox every 4-6 hours manually. Maintain a high humidity 95-100% by misting or using humidifier.

Great thing to use is aquarium air pump for constant FAE in the growbox. There is a rock at the end of the hose, it should be dropped into a jar of water. This will filter the incoming air and maintain high humidity level. 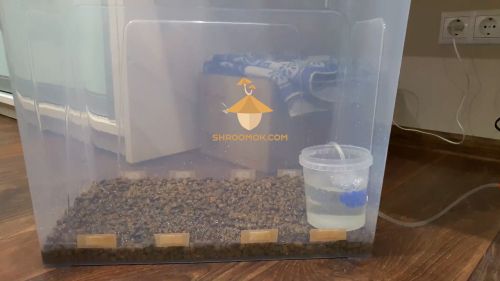 The aquarium air pump should be switched on all the time 24/7 during this hard period. This way fresh air exchange in the growbox move all the time and don't worry about high CO2 level. For sufficient FAE use air pump with about 150 liters per hour capacity and higher. This would be enough for growbox of 30-80 liters. 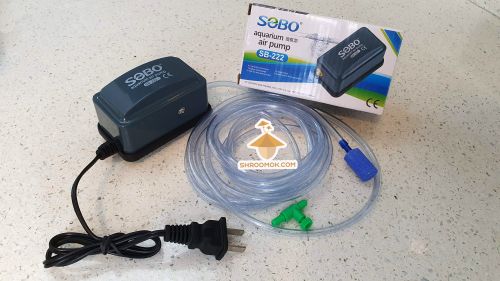 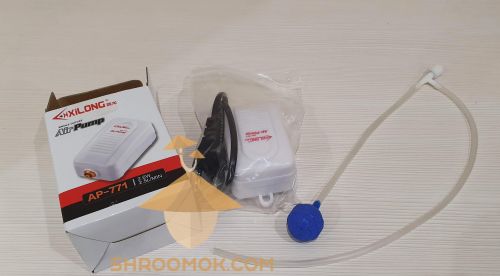 3️⃣ If there is significant overlay (stage 2) you can use fork-tek and "scratch" mycelium. This way give air access for mushroom cake. But don't scrape it off completely!

The fork must be sterile! Otherwise, you increase the risk of contamination.

This is a rather blasphemous method, but sometimes it works. 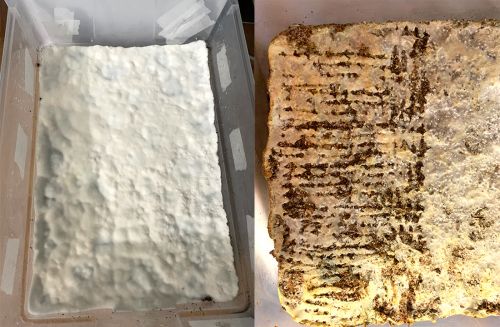 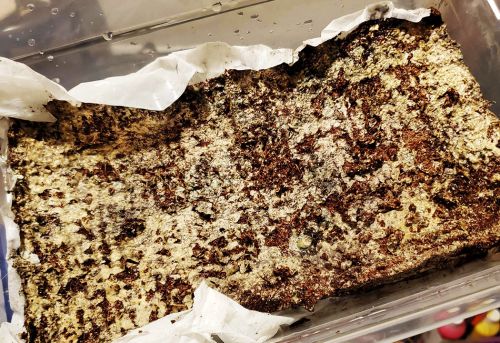 How to deal with overlay? Mushroom cake after fork scratching 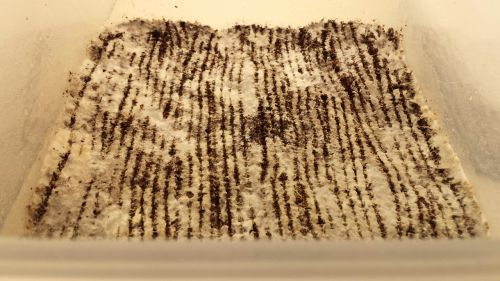 4️⃣ If casing layer is too dry make rehydration after scratching mycelium with fork. If overlay is not removed, then rehydration is absolutely useless. A demonstration in the photo below. 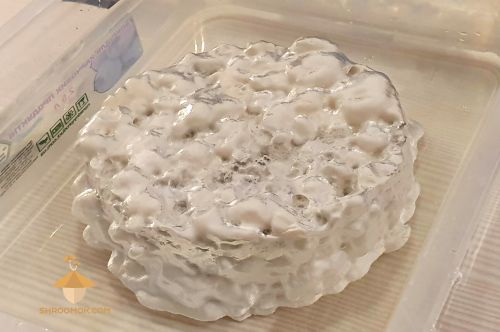 Magic fungi cake with overlay in the water. Mycelium is watertight 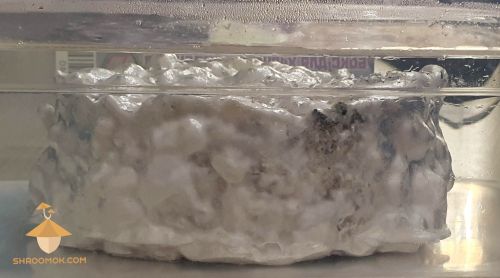 Check out How to rehydrate mushroom cake section.

5️⃣ There is a hypothesis that rehydration with a cold shock works as a trigger for pinning. The temperature shock can inhibit the aggressive growth of mycelium on the cakes and stimulate pins and primordia formation.

In our «Cold Shock by Shroomok» experiment this hypothesis was not confirmed. But we are working on gathering data, as one experiment is not enough for final conclusions and recommendations.

A few points to consider

🔴 Don't touch casing layer with your hands. This can provoke contamination. Use sterile gloves (treated with alcohol) when work with mushroom cake.

🔴 Use sterile fork (treated with alcohol) for fork-tek scratching.

🔴 Fork-tek is rather stressful for mycelium. It takes about one week for recovering.

🔴 You may notice that top casing layer is completely dry. In such case rehydration is must have.

🔴 Overlay indicates significant faults in the growing process and the probability to start pinning process is quite low. You can wait for mushrooms too long or you're not going to get them. Be prepared to say goodbye to such cake any moment.

🔴 Even if you haven't made mistakes during the colonization and fruiting phase the cause of stroma overlay may be because of poor strain genetics. In that case the mycelium is only capable of vegetative growth. It will actively continue to devour the substrate, but will not be able to form fruiting bodies. Alas, you won't get mushrooms from such cake even in ideal fruiting conditions.

About stroma and overlay in Shroomok growing experience

A prime example of overlay in our growing experience was Psilocybe Cubensis F+. It was very actively colonizing the substrate. The first signs of mycelium in the jars were already 4 days after inoculation. When casing was 60% colonized with mycelium we've started fruiting phase.

Overlay happened at the fruiting stage in the growbox at +21°...23°C, humidity 99% and FAE 4-6 times a day - fruiting conditions that were successful for other strains.

But in the end we did not get mushrooms from these cakes at all.

We were curious to play with different salvage options. Each mushroom cake with stroma overlay was subjected to a number of experiments: fork-tek, fork-tek with and without rehydration, cold-shocking.

No one was successful. The cake was covered with a new white fluffy mycelium. No pins. No shrooms. Perhaps our cakes were an example genetic stroma degeneration.

After 75 days after inoculation and all our experiments we said goodbye to three Psilocybe Cubensis F+ cakes. 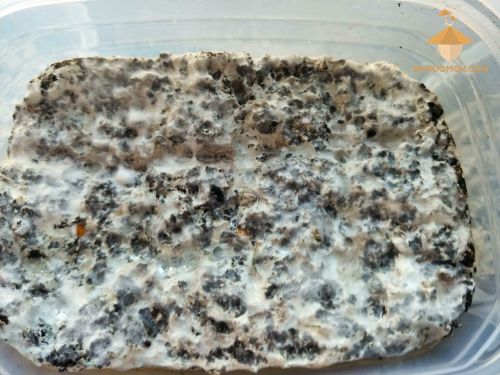 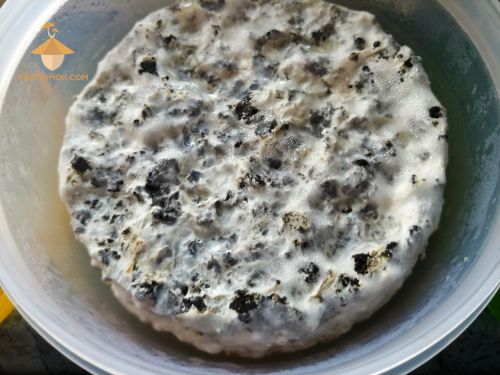 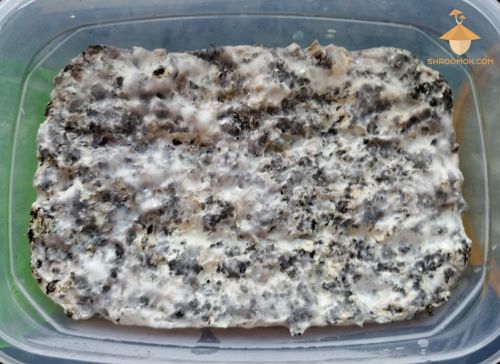 🔴 Check out Mushroom aborts section and short video below